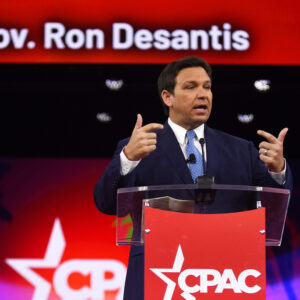 As he has with most trendy right-wing political stunts, Florida Gov. Ron DeSantis (R) refused to be left out of the abortion-banning race.

END_OF_DOCUMENT_TOKEN_TO_BE_REPLACED Has Ron DeSantis Been Chatting With Clarence Thomas About Redistricting? Judge Strikes Down Parts Of Florida’s Anti-Voting Law
INSIDE: Ginni Thomas ... Ukraine ... Fetus-Hoarding
By Cristina Cabrera | April 1, 2022 8:20 a.m.
Where Things Stand: Another Far-Right Rep Is Bringing Another Fake Grievance Issue To DC
This is your TPM evening briefing.
By Nicole Lafond | March 31, 2022 6:15 p.m. The domino effect is playing out much quicker than I expected.

I wrote just yesterday about far-right Rep. Lauren Boebert (R-CO) bringing an on-its-face small potatoes issue to Congress, introducing a resolution — co-sponsored by 20 other Republicans — that would recognize the second place finisher of an NCAA women’s swimming tournament as the first place winner. Both of the impressive athletes are women. The first place winner is a trans women. Hence the discriminatory and socially backwards uproar.