Trump Accuses Gov. Andrew Cuomo Of Having A ‘Total Meltdown’

After New York Gov. Andrew Cuomo (D) made comments about how “America was never that great” on the subject of gender equality, President Donald Trump tweeted that Cuomo was having a “total meltdown.”

“WE’RE NOT GOING TO MAKE AMERICA GREAT AGAIN, IT WAS NEVER THAT GREAT.” Can you believe this is the Governor of the Highest Taxed State in the U.S., Andrew Cuomo, having a total meltdown!

Cuomo made the remarks at a bill signing event on Wednesday.

“We’re not going to make America great again. It was never that great,” he said, per a CNN report. “We have not reached greatness. We will reach greatness when every American is fully engaged. We will reach greatness when discrimination and stereotyping of women, 51 percent of our population, is gone, and every woman’s full potential is realized and unleashed and every woman is making her full contribution.”

In a statement after the event, a Cuomo spokesperson added context to the comments.

“Governor Cuomo disagrees with the President,” his press secretary Dani Lever said in a statement. “The Governor believes America is great and that her full greatness will be fully realized when every man, woman, and child has full equality. America has not yet reached its maximum potential.”

“When the President speaks about making America great again—going back in time—he ignores the pain so many endured and that we suffered from slavery, discrimination, segregation, sexism and marginalized women’s contributions,” she continued. “The Governor believes that when everyone is fully included and everyone is contributing to their maximum potential, that is when America will achieve maximum greatness.” 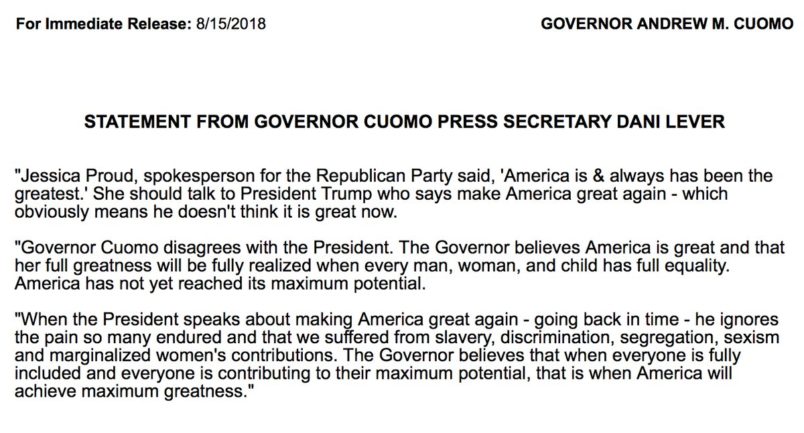