A civilian employee was responsible for the lewd tweets posted on the Fort Bragg military base’s official Twitter account on Wednesday, according to Col. Joe Buccino, the public affairs officer for the XVIII Airborne Corps.

Buccino told TPM over the phone that the employee, who was one of three people who had access to the account, told investigators that he had sent the tweets by accident. The XVIII Airborne Corps had previously announced that the account was “hacked.”

Earlier this afternoon the Fort Bragg Twitter account was hacked and a string of inappropriate tweets were posted to the account. When made aware, the Fort Bragg social media team deleted the tweets & temporarily moved the account offline. The matter is under investigation.

The base subsequently closed its investigation after the staffer came forward, and there will be a “less formal inquiry into appropriate measures” to address the incident, according to Buccino.

He also said that the Twitter account, which was temporarily deactivated shortly after the tweets were posted, will be turned back on in approximately one week to 30 days.

On Wednesday afternoon, the account set off a firestorm when it responded to a sex worker’s tweets with decidedly graphic comments: 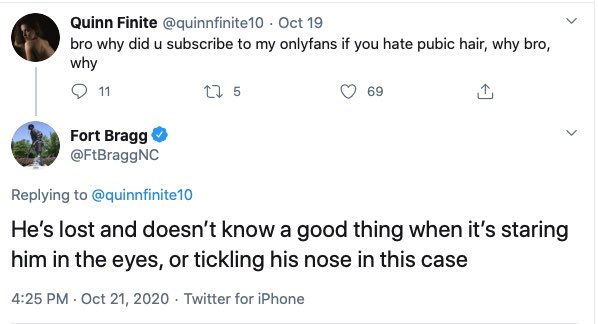 The sex worker, who goes by Quinn Finite, cheered on the mishap.

Finite also pounced on a business opportunity by offering a 50% military discount on her content on OnlyFans.

Newsletters
Your subscription could not be saved. Please try again.
Your subscription has been successful.
Cristina Cabrera (@crismcabrera)  is a newswriter at TPM based in New York. She previously worked for Vocativ, USA Today and NY1 News.
Have a tip? Send it Here!
includes:
Fort Bragg
Latest News
Comments are now Members-Only