When former Texas lawmaker Steve Stockman returned to Congress in 2013 after a sixteen-year hiatus, he scored headlines for wild stunts like inviting conservative rocker Ted Nugent to a State of the Union address and coining the slogan, “If babies had guns, they wouldn’t be aborted.”

Stockman’s last two-year term was also dogged by swirling allegations of campaign finance violations flagged by government watchdog groups and the Office of Congressional Ethics. Those allegations came into sharp focus on Tuesday with a 28-count federal grand jury indictment against Stockman and one of his former congressional aides, including charges of mail and wire fraud, lying to the Federal Election Commission, excessive campaign contributions and money laundering (one count charges Stockman with filing a false tax return).

Stockman and the former aide, Jason Posey, are accused of using hundreds of thousands of dollars stolen from charitable foundations to bankroll Stockman’s congressional campaigns and pay off their personal expenses. Some of the charges against Stockman first came to light after he was arrested on March 16 while trying to board a flight to the United Arab Emirates (Stockman told the Houston Chronicle he planned to make the trip to “help Sunni Muslims”).

The bombastic former lawmaker is maintaining his innocence, telling a Chronicle reporter outside a Texas courthouse on March 17 that he was targeted by a “deep state that’s continuing to progress.” He has continued to sound off about “deep state corrupt officials,” “toilets that spy on you” and Hillary Clinton’s health on his @SteveWorks4You Twitter account in the days since his arrest.

Stockman plans to plead not guilty and “turn to preparing his defense,” his lawyer, Dane Ball, confirmed to TPM. Asked about his client’s “deep state” comments, Ball said, “It is not our job to prove conspiracy theories in the public square, but to defend Mr. Stockman on the merits in a court of law.”

Ball has his work cut out for him. In the 46-page indictment filed in U.S. District Court for the Southern District of Texas, the grand jury charged that Stockman swindled donors out of some $1.25 million obtained under false pretenses between 2010 and 2014. A large chunk of that sum allegedly was diverted to fund Stockman’s successful 2012 House run, failed 2014 Senate run, and the personal expenses of Stockman, Posey, and another of Stockman’s former congressional aides, Thomas Dodd.

Some of those expenses were rather unusual, like campaign business “trips to Africa.”

The government’s case is bolstered by dozens of emails and records of bank transactions and wire transfers. It is also aided by cooperation from Dodd, who struck a plea deal with the government last week, copping to conspiracy to commit mail and wire fraud and to falsely solicit contributions.

One scheme Stockman and Dodd allegedly carried out in 2013 involved soliciting a $350,000 check to a Nevada-based nonprofit, Life Without Limits, from an unnamed donor. The men allegedly told the donor that money would be used to establish the “Freedom House,” a Washington, D.C.-based meeting place and dormitory where young people would be instilled with “the ideas of liberty.”

No such facility was ever set up, according to the indictment. Instead, prosecutors say Stockman funneled $50,000 towards his 2014 Senate campaign and some $41,000 to fund “months of covert surveillance targeting an individual who Stockman considered to be a potential challenger in a future primary election.” Another $20,000 went to Stockman’s brother’s book business, $11,000 to cover a 30-day alcoholism treatment program for a “female associate,” and $2,200 paid for his nephew and family friend’s daughter’s summer camp, per the indictment. 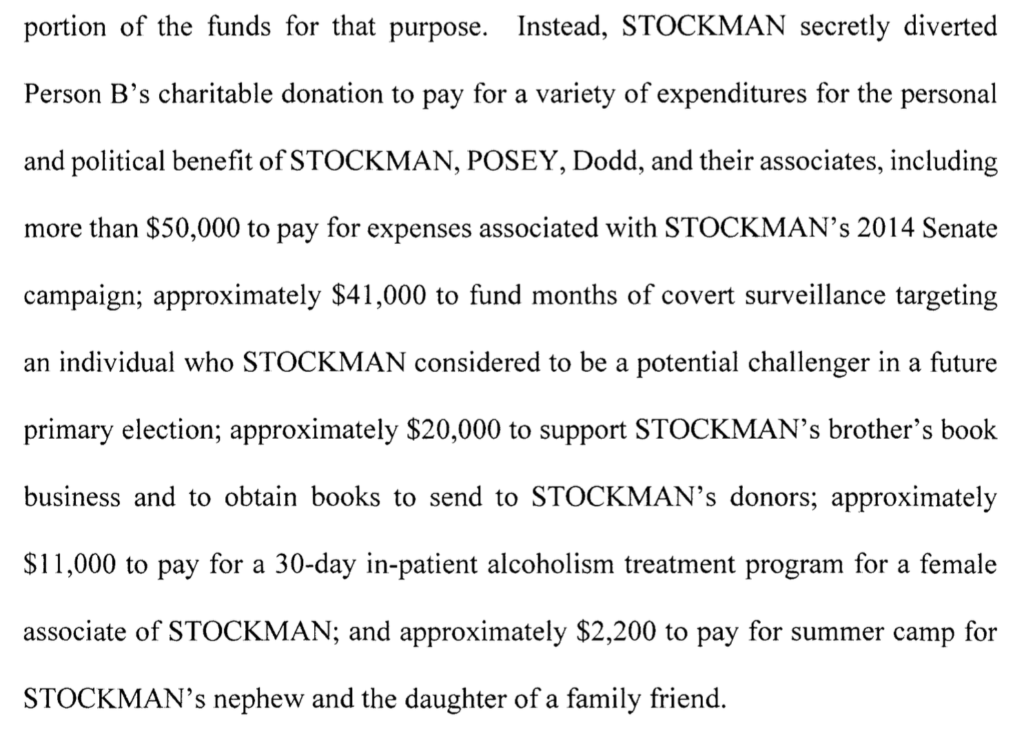 Shortly after Stockman took office in February 2013, Posey and Dodd allegedly used some of the funds from that donor to each write three $2,500 checks to Stockman’s congressional campaign committee, a maneuver later condemned in a 2014 Office of Congressional Ethics report. The men filed a report with the FEC that falsely attributed the $15,000 in contributions to Posey’s father and Dodd’s mother to mask their involvement, but scrutiny from the Sunlight Foundation, a government watchdog, forced them to file an amended report acknowledging that they wrote the checks themselves. Both were fired from Stockman’s office after that amended report was filed.

In another scheme prosecutors say went toward funding Stockman’s failed primary challenge against Sen. John Cornyn (R-TX), Posey allegedly used a non-profit he controlled, the Center for the American Future, to procure over $450,000 from the same donor to fund a direct-mail attack targeting Stockman’s opponent. Only about half of that money went to the mail campaign, according to the indictment, while the remainder was used to pay campaign debts and Posey’s personal expenses, including “airfare on a flight departing the United States.”

The U.S. Attorney’s office in Houston said that Posey still was not in custody as of Thursday evening.

For his part, Stockman, who’d posted a $25,000 bond earlier this month, appears undeterred by the legal battle ahead, firing off tweets praising President Donald Trump and the House Freedom Caucus.

Joe Sandler, an expert in campaign finance law at Washington, D.C. firm Sandler Reiff Lamb Rosenstein & Birkenstock, told TPM that the two are unlikely to stand trial as cases like theirs, in which the government has such an abundance of evidence, are typically resolved through plea agreements.

Cautioning that the defense may have information that could “shed a different light like this,” Sandler said that as it stands now “It sure looks to me like they got these guys.”

Read the full indictment against Stockman and Posey below: