10 hours ago
Surgeon General: COVID-19 Cases Next Week Will Be ‘Our Pearl Harbor Moment’

By Tierney Sneed
|
February 23, 2018 4:32 p.m.
EDITORS' NOTE: TPM is making our COVID-19 coverage free to all readers during this national health crisis. If you’d like to support TPM's reporters, editors and staff, the best way to do so is to become a member.

On the heels of revealing a new set of charges filed in Virginia against Paul Manafort and securing a plea deal from Manafort’s longtime business partner Rick Gates, Special Counsel Bob Mueller on Friday filed a new indictment — known as a superseding indictment — against Manafort that his grand jury in Washington, D.C. approved.

Much of the new indictment tracks with the charges that were brought in Virginia, as well as with the counts outlined in the plea deal that Gates agreed to Friday.

Prosecutors alleged that Manafort, with assistance from Gates, hid tens of millions of dollars they made lobbying Ukraine, to avoid paying taxes on it, according to the new indictment. The indictment reiterates allegations that Manafort failed to disclose, in violation of the Foreign Agents Registration Act, the lobbying campaign he led in the U.S. on behalf of the pro-Russian Ukrainian political party he was advising.

The new indictment goes into more detail about a 2012 report Manafort spearheaded to justify the prosecution of a political rival of the Ukrainian politician Manafort represented; it references an unnamed law firm that Manafort recruited to write the reported, as well as a PR company, dubbed “Company C” that assisted with the rollout. 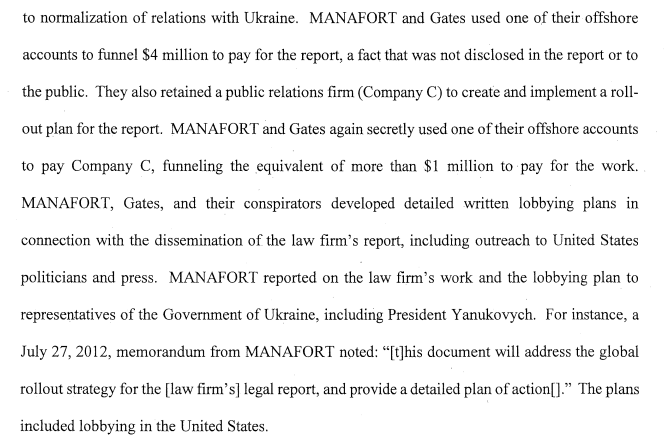 The law firm, it’s been reported, is Skadden, Arps, Slate, Meagher & Flom. A lawyer from that firm this week pleaded guilty to lying to Mueller’s team about his conversations with Gates.

The indictment also details a part of an alleged lobbying scheme that previously had been referenced in the filings related to Gates’ plea deal. Prosecutors allege that Manafort assembled and paid, via his offshore accounts, a group of former European politicians to “informally” lobby on Ukraine’s behalf but “without any visible relationship with the Government of Ukraine,” quoting a memo that Manafort is said to have written in 2012.

The indictment was handed down by a grand jury last week, but only unsealed Friday. In the motion to unseal it Friday afternoon, Mueller said that “the cause for sealing the indictment” had become “moot.” U.S. District Court Judge Amy Berman Jackson approved of its unsealing quickly after the unsealing motion because public Friday.

Earlier Friday, Gates entered a guilty plea to two counts brought by Mueller: conspiracy against the U.S. and false statements to federal authorities. As part of his plea agreement, Gates agreed to cooperate with Mueller’s investigation. The plea agreement said that Gates “agrees to testify at any proceeding” as requested by Mueller.