The unsealing of an application FBI agents used to secure a search warrant for Paul Manafort’s residence reveals new information about the former Trump campaign chairman’s business relationship with Oleg Deripaska, a Russian billionaire whom Manafort sought to offer “private briefings” while he was leading the Trump campaign.

According to the warrant, Deripaska helped fund Manafort’s years-long lobbying effort for Ukraine’s Party of Regions, which predated his work on the Trump campaign. Manafort also received a $10 million loan from Deripaska, the warrant said.

The warrant additionally reveals that by July 2017, Special Counsel Robert Mueller had on his radar loans Manafort took in 2016 and early 2017 from a bank whose CEO served as the Trump campaign adviser and reportedly wanted to be Trump’s Army secretary.

FBI agents sought the warrant from a magistrate judge in late July 2017, to search a Manafort apartment in Virginia. A more redacted version of the warrant had been included in previous court filings in Manafort’s cases in Virginia and Washington.

Reuters was the first to report that this less-redaction version of the warrant had been unsealed.

According to the warrant affidavit, an individual whose identity remains redacted told the FBI that “Deripaska helped fund Manafort’s Ukrainian work when it began in 2005-06.”

“And the 2010 tax returns for a company jointly owned by Manafort and his wife — John Hannah, LLC — reveals a $10,000,000 loan to the company from a ‘Russian lender,'” the affidavit continues. “A court-authorized search in May 2017 of a storage locker in Virginia used by Manafort revealed documents that show that the identity of the Russian lender was Deripaska.”

It had been previously reported that Manafort’s longtime business relationship with Deripaska had gone south over a 2008 Ukrainian investment that went awry.

During the 2016 campaign, Manafort told his deputy in Ukraine, Konstantin Kilimnik — whom Mueller has accused of having ties to Russian spying agencies — to offer Deripaska  “private briefings.”

Citing a 2014 interview that Manafort’s business partner Rick Gates gave the FBI, the warrant details Manafort business dealings with another oligarch, whose identity remains redacted. (Gates has pleaded guilty in Mueller’s probe and is cooperating).

This appears to be a reference to Dmytro Firtash, who worked on a proposal with Manafort to buy Manhattan’s Drake hotel. The deal fell through, and Firtash was later indicted by a grand jury in Chicago for bribery and other charges, but remains out of the country.

The newly-unsealed version of the warrant removes extended redactions for a portion of the affidavit devoted to sketchy loans Manafort took on his real estate and other ventures.

One of those loans was $3.5 million from a unit of Spruce Capital, whose co-founder Joshua Crane partnered with Trump on real estate deals in Hawaii. The warrant details the financial trouble Manafort appeared to be in when he received the loan.

(Crane has denied having any relationship with Manafort and said the loan was through a broker.) 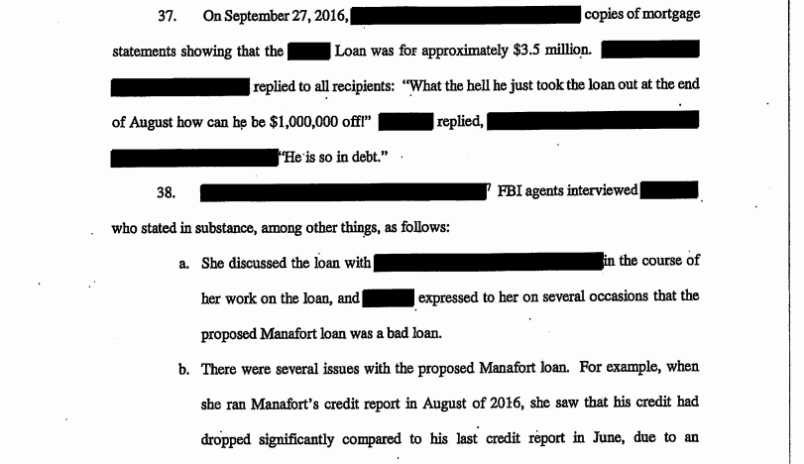 The warrant also references $16 millions in loans, previously reported, from a bank in Chicago, whose CEO served as a Trump campaign economic adviser. Manafort sought the loans in 2016, after he had left the Trump campaign.

The banker, Steve Calk, reportedly was interested in becoming Trump’s Army secretary, and NBC reported earlier this year the Mueller is probing whether Manafort promised Calk a position in the administration in exchange for the loans.

The section that mentions the loans from Calk’s bank, Federal Savings Bank, is followed by an extended redacted section.