On Monday evening, Twitter was abuzz with the news that the English-language publication Arab News published a scathing statement exposing a conservative Middle East expert who asked his former editors to delete columns he wrote criticizing President Donald Trump.

But by Tuesday morning, both the statement and the anti-Trump columns in question had disappeared from the site.

Andrew Bowen, an American Enterprise Institute visiting scholar, reportedly made the request because he was seeking a State Department role. The odd series of events that followed illustrates just how far those seeking jobs in the Trump administration may go to prove fealty to the President. It’s also a case study in how quickly conservatives opposed to Trump became his boosters as soon as he won the election.

In a now-deleted statement, the Saudi Arabia-based Arab News wrote that Bowen “repeatedly requested” the removal of certain articles that denigrated Trump and praised Hilary Clinton. Their removal was necessary for Bowen “to be cleared” for a role in the Trump administration, the statement read.

The publication also alleged that Bowen insinuated “verbally and in writing” that he would enlist “influential friends and contacts” to have the columns removed. The statement noted that Arab News editors declined to grant Bowen’s wish because they found it “unprofessional journalistically” and his pieces contained “no factual errors or libelous comments” necessitating retraction.

While many of Bowen’s other pieces are still live on the site, his most vociferous criticism of Trump is gone. This includes a column written just one day before the election in which Bowen accused Trump of stirring “xenophobia and anti-Muslim sentiments” and displaying a pattern of “questionable business practices and ethics.”

“Trump has shown repeatedly a frank disregard for human decency and civility,” Bowen wrote at the time (a cached version of the article may be viewed here).

Arab News did not respond Tuesday to TPM’s request for comment.

Bowen did not respond to an interview request from TPM, but told the Washington Post that he was “deeply concerned and saddened” by Arab News’ statement and that the site was addressing his “concerns” with the columns.

Veronique Rodman, public affairs officer for the American Enterprise Institute, told TPM that Bowen was out of the office “dealing with family issues” and said that he relayed to her that Arab News issued the statement mistakenly.

“We talked and he wanted me to be sure to let you know that apparently it’s our understanding that the statement was in error,” Rodman said.

Rodman said she did not have details about whether Bowen made the request to take down his columns. She also said his writing for Arab News did not affect his role at AEI.

“AEI is an independent, nonpartisan political institute and a lot of our scholars often do work on their own,” she said. “It has nothing to do with the institute or the work he does for the institute.”

In the days immediately following the election, Bowen began to push out columns promoting the incoming administration. One December post for AEI argued that Rex Tillerson’s decades working for ExxonMobil made him the “right choice” for secretary of state. 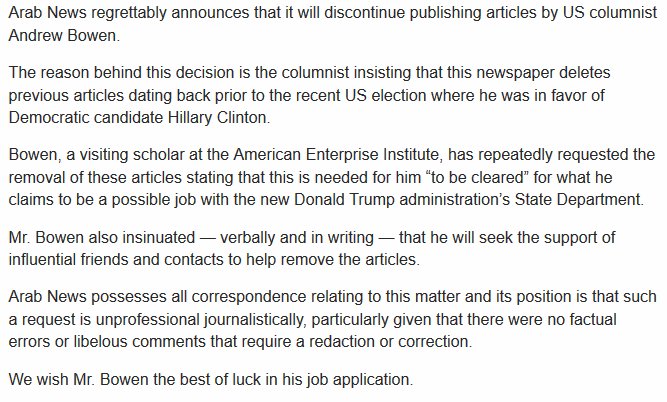