President Donald Trump has retweeted three unverified anti-Muslim videos that were posted by a leader of the far-right group Britain First.

Jayda Fransen, deputy head of Britain First — who was convicted of religiously aggravated harassment in September, according to the Guardian — originally posted the videos that supposedly show violence that Fransen claims was ignited by Muslims. One video purported to show a group of Muslims pushing a boy off a roof. Another claimed to depict a Muslim destroying a statue of Virgin Mary. The third claimed to be a video of a Dutch boy on crutches getting beaten up by immigrants.

Trump retweeted the videos to his followers early Wednesday morning, just after he tweeted about the economy being in “record territory” — he may have been watching “Fox and Friends” because he tagged the show in that tweet — and just before a tweet about CNN not attending the White House holiday party. 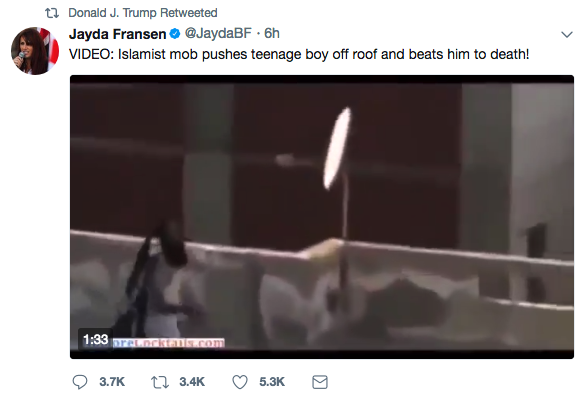 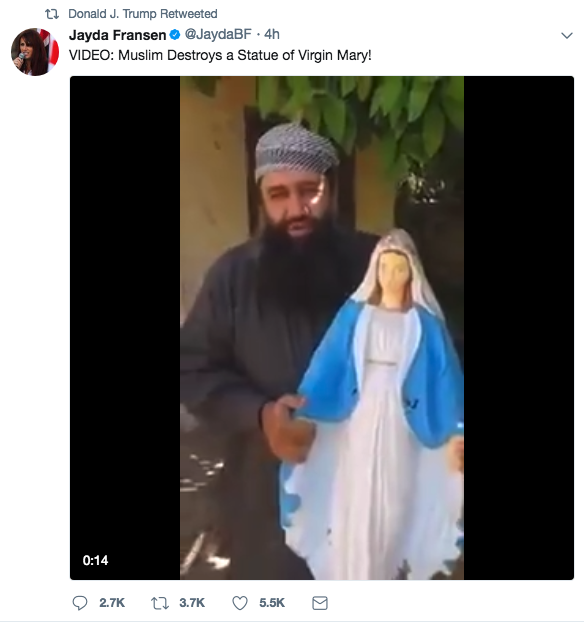 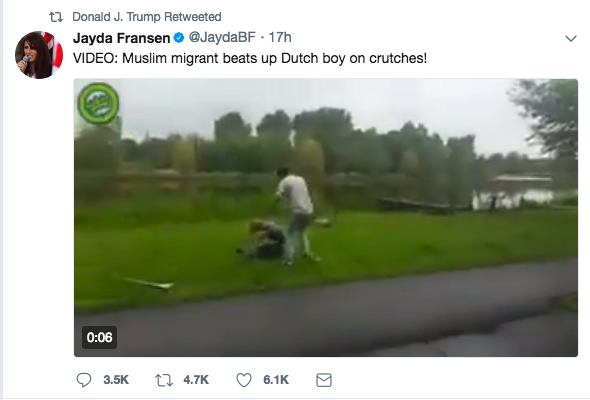 Fransen’s group Britain First has a reputation for being opposed to what it calls the “Islamization” of Britian, according to the Associated Press. The group has also campaigned against the building of new mosques.

Fransen responded in delight to the retweets, saying “GOD BLESS YOU TRUMP” and “GOD BLESS AMERICA.”

The President’s retweets have already been already been denounced by the right and the left. Piers Morgan, a journalist and friend of of Trump, tweeted saying “what the hell are you doing?” And the top editor at conspiracy theory site Info Wars said the retweets were “not great optics.”

Good morning, Mr President @realDonaldTrump – what the hell are you doing retweeting a bunch of unverified videos by Britain First, a bunch of disgustingly racist far-right extremists?
Please STOP this madness & undo your retweets.

Trump has a history of perpetuating anti-Muslim rhetoric. He claimed he saw Muslims celebrating in New Jersey after the 9-11 terrorist attack on the World Trade Center in New York. During the 2016 campaign, he called for a ban on Muslims entering the U.S. He tweeted about the United Kingdom’s “Muslim problem” in December 2015.

The United Kingdom is trying hard to disguise their massive Muslim problem. Everybody is wise to what is happening, very sad! Be honest.

Throughout his campaign, he suggested the government should track Muslim Americans and the travel ban Trump hastily created through executive order has been widely labeled a Muslim travel ban as it initially blocked travel from seven predominantly Muslim countries.

Nicole Lafond (@Nicole_Lafond)  is TPM’s associate editor, based in New York. She has also worked as the special projects editor and as a senior newswriter for TPM. She has a master’s degree in journalism from Columbia University and previously covered education in central Illinois.
Have a tip? Send it Here!
Dear Reader,
BECOME A MEMBER
BECOME A MEMBER