3 days ago
The Cold War Legacy Lurking in US Groundwater

During his hour-long news conference and series of media appearances following his meeting with North Korean leader Kim Jong-un on Tuesday, President Donald Trump didn’t hesitate to defend and even praise the dictator, who’s best known for his record of brutal human rights violations that involve starving his people, running a ruthless police state, sexual violence and even ordering the murder of members of his own family.

Addressing the inhumane acts by the Kim regime during a press conference Tuesday in Singapore, Trump told reporters that “all I can do is do— what can I do? We have to stop the nukes,” vowing that those who have been tortured and held in gruesome captivity would be the “great winners today.” That is, if Kim breaks with his family’s record of breaking promises with the U.S. to denuclearize the peninsula.

Here’s a rundown of all the times Trump’s painted a positive, and even glowing portrait of the regime leader, whom he praised just as often as he mentioned how many hours he had been awake straight (26):

Trump barreled right into the press conference by expressing gratitude for Kim, who took “the first bold step toward a bright new future.” He boasted to reporters that the meeting was “honest, direct and productive.”

Minutes later he called Kim “very talented” and praised him for his ability to run a country as a youngster: “Anybody that takes over a situation like he did, at 26 years of age, and is able to run it, and run it tough — I don’t say he was nice or I don’t say anything about it — he ran it. few people at that age. You can take 1 out of 10,000 could not do it.“

He later told reporters they would be “surprised” at how “smart” Kim is, branding him a “very good negotiator” who “wants to do the right thing.”

The interview with ABC’s George Stephanopoulos:

In a follow-up interview with Stephanopolous, Trump gave his praise a new spin, suggesting that Kim’s “country does love him,” arguing for the passion North Koreans have for their dictator: “His people, you see the fervor. They have a great fervor.”

He then claimed the two sanguine leaders really, actually do trust each other, despite what you might have heard: “I do trust him, yeah,” Tump said. “Now, will I come back to you in a year and you’ll be interviewing and I’ll say, ‘Gee I made a mistake?’ That’s always possible. You know, we’re dealing at a very high level, a lot of things can change, a lot of things are possible.

After historic summit, @ABC News' @GStephanopoulos asked Pres. Trump, "How do you trust a killer like that?"

Trump: "I'm given what I'm given, okay? I mean, this is what we have and this is where we are." https://t.co/Vkt0dIxogj pic.twitter.com/8ppDkB08Dy

And, Trump added, the regime leader, who ordered the poisoning of his brother in a public Malaysian airport last year, even has an open invitation to the White House: “I would love to have him.”

The interview with Greta Van Susteren:

Trump continued his gushing over Kim well into Tuesday afternoon, making his most complimentary comments about Kim to Van Susteren, who asked him, point-blank, whether Kim actually loves the people he starves.

“Really, he’s got a great personality. He’s a funny guy, he’s very smart, he’s a great negotiator. He loves his people, not that I’m surprised by that, but he loves his people. And I think that we have the start of an amazing deal,” Trump said.

He added: “I think he liked me, and I like him. And I understand the past and, you know, nobody has to tell me, he’s a rough guy. He has to be a rough guy or he has been a rough person. But we got along very well. He’s smart, loves his people, he loves his country. He wants a lot of good things and that’s why he’s doing this.”

Trump also doesn’t blame Kim for continuing his predecessor’s police state: “Look, he’s doing what he’s seen done, if you look at it. But, I really have to go by today and by yesterday and by a couple of weeks ago because that’s really when this whole thing started.”

And on the pair’s palpable chemistry, Trump said: “Well, I think you have somebody that has a great feeling for them. He wants to do right by them and we got along really well. We had a great chemistry — you understand how I feel about chemistry. It’s very important. I mean, I know people where there is no chemistry no matter what you do you just don’t have it. We had it right from the beginning, I talked about that and I think great things are going to happen for North Korea.”

Excerpts from the interview with his “shadow chief of staff” (Fox News’ Sean Hannity):

Before the full interview airs during Hannity’s show on Tuesday evening, the hosts of “Fox and Friends” teased some of Trump’s initial comments. Trump told Hannity that he and Kim “got along very well” right “from the beginning,” which was better than he assumed.

The President also walked back the name-calling he engaged in with Kim in recent months — when he dubbed him “little Rocket Man” and claimed his nuclear “button” was bigger than Kim’s — sheepishly calling the comments “foolish,” but necessary.

That segment of “Fox and Friends” ended with Hannity cajoling Trump for his skills in reading people. 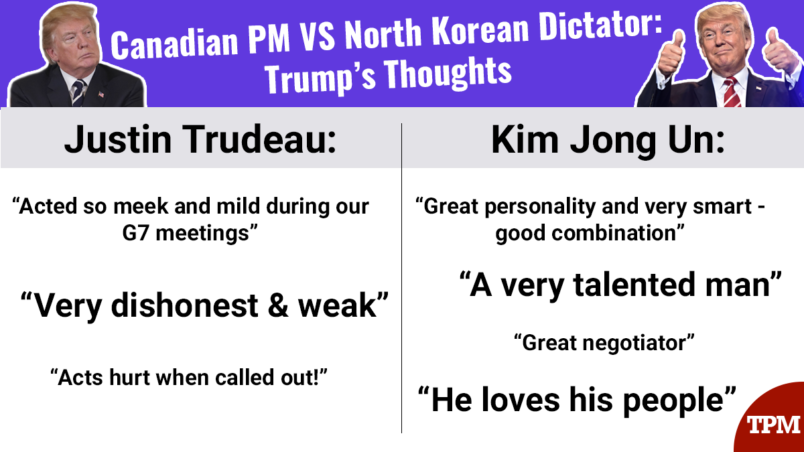