14 hours ago
Warren: Voters Must Elect Dems In Midterms Who Would Nix Filibuster To Codify Roe

In a stunning development that gives the clearest indication yet that at least some in the President’s inner circle were willing to accept Russian help during the campaign, Donald Trump, Jr. released an email chain Tuesday that detailed the lead-up to his meeting with a Kremlin-linked lawyer who promised dirt on his father’s likely presidential opponent, Hillary Clinton.

In the email exchange, Trump family acquaintance Rob Goldstone identified the lawyer, who he did not name, as a “Russian government attorney” who had “documents and information that would incriminate Hillary and her dealings with Russia and would be very useful to your father.”

Goldstone also wrote that the information the lawyer had was “ultra sensitive” because it was “part of Russia and its government’s support for Mr. Trump.”

“If it’s what you say I love it especially later in the summer,” Trump Jr. replied. He ultimately brought his brother-in-law, Jared Kushner, and then-campaign chairman Paul Manafort to the June 2016 meeting.

The special counsel’s office and four congressional committees are currently working to investigate Russia’s interference in the 2016 election, including whether Trump’s team cooperated with Russian operatives. The President and his advisers have strenuously denied such allegations, calling the federal Russia probe a “witch hunt” and “fake news.”

The President’s private legal team has said he was unaware of his eldest son’s meeting with the lawyer, Natalia Veselnitskaya, shortly after he secured the GOP nomination.

Trump Jr. shared the remarkable email exchange with Goldstone on Twitter after days of obfuscating about the nature and purpose of his sit-down with Veselnitskaya. In the emails, he suggested hosting the lawyer at Trump Tower and thanked Goldstone for arranging the sit-down.

In his initial email, Goldstone suggested sending the information about Clinton directly to Donald Trump via his secretary, Rhona Graff, but cautioned that it was “ultra sensitive.”

The eldest Trump son tweeted images of the emails alongside a statement saying he was sharing them in an effort to be “totally transparent” just minutes before the New York Times published a story detailing the contents of the same emails. The newspaper noted that he released the emails on Twitter in lieu of responding to a request for comment.

The Times has revealed the saga of Trump Jr. and Veselnitskaya in a bombshell series of scoops over the last four days. First, the newspaper reported Saturday on the previously undisclosed Trump Tower meeting, prompting the President’s eldest son to say he met the lawyer about a defunct U.S. program to adopt Russian children. He mentioned nothing about the 2016 campaign.

On Sunday, the Times reported that Trump Jr. went to the meeting with the promise of obtaining damaging information about Clinton. Trump Jr. and the White House admitted as much, but said that he did not know Veselnitskaya’s identity beforehand and that she ultimately had nothing useful to share. Trump Jr. also argued that all political campaigns try to obtain negative information about their opponents.

By Monday, Trump Jr. had retained attorney Alan Futerfas, a white-collar lawyer who has defended members of several major New York City mob families. That night, the newspaper was reporting that Trump Jr. and Goldstone exchanged emails that clearly identified Veselnitskaya as a Kremlin-linked operative.

The President has yet to make any public statement in defense of his son.

Veselnitskaya denied having “any damaging or sensitive information about Hillary Clinton” or any connection to the Russian government in an interview with NBC News published Tuesday morning.

“It’s quite possible that maybe they were longing for such an information. They wanted it so badly that they could only hear the thought that they wanted,” she added.

View the emails below. 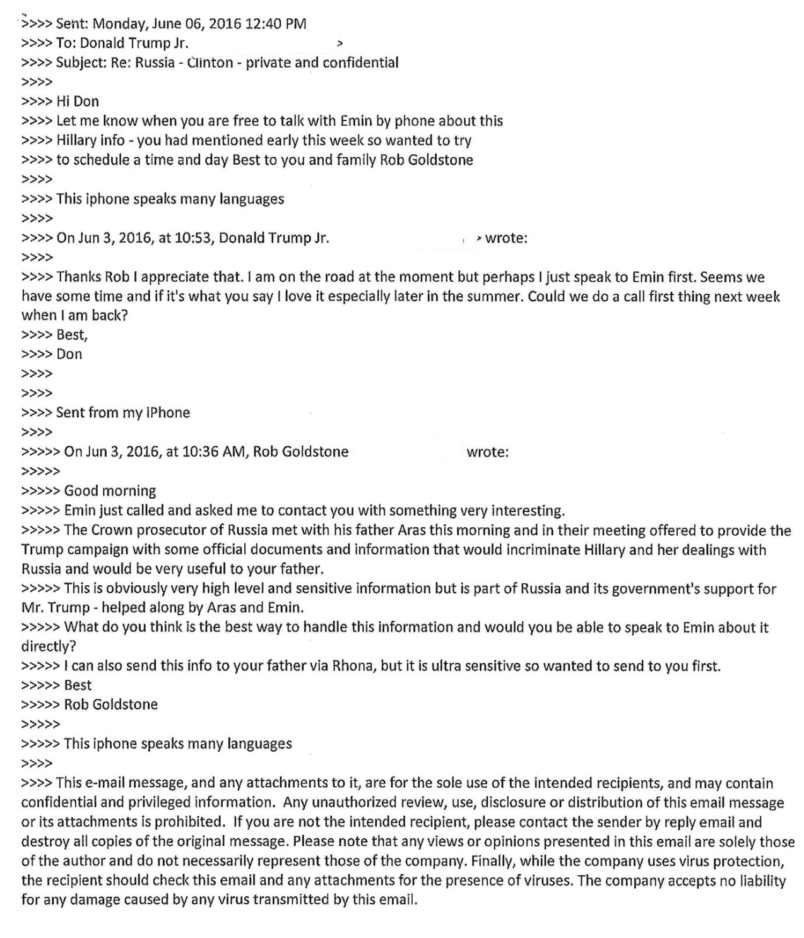 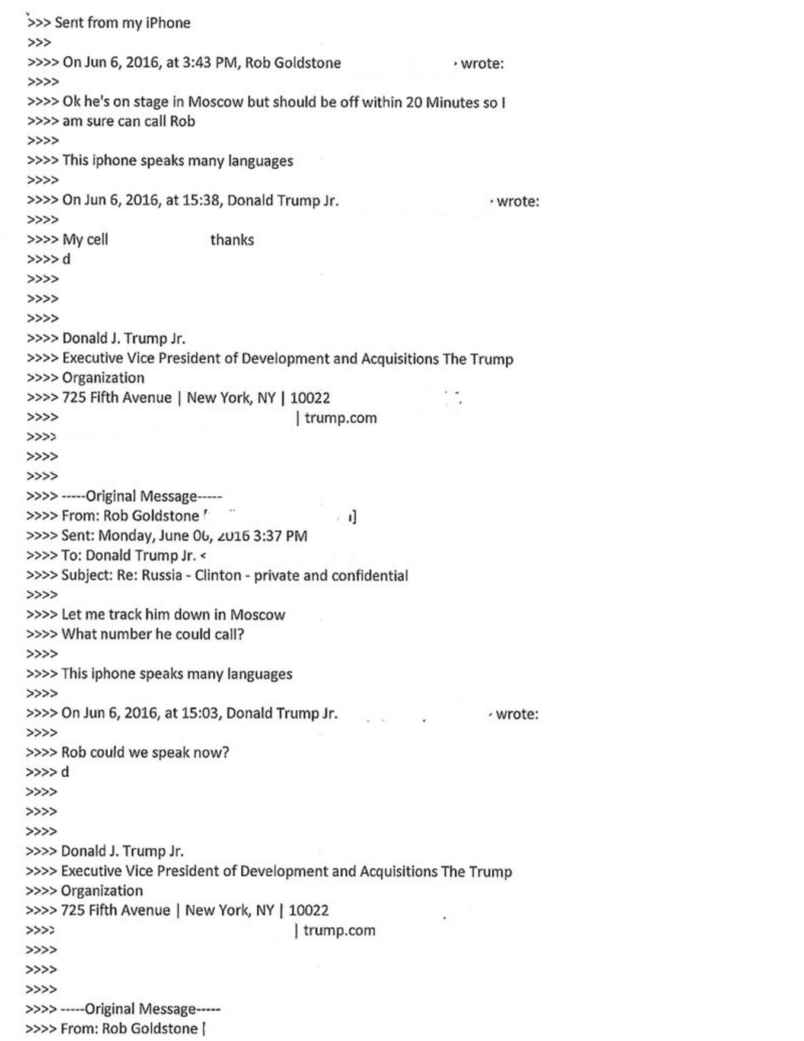 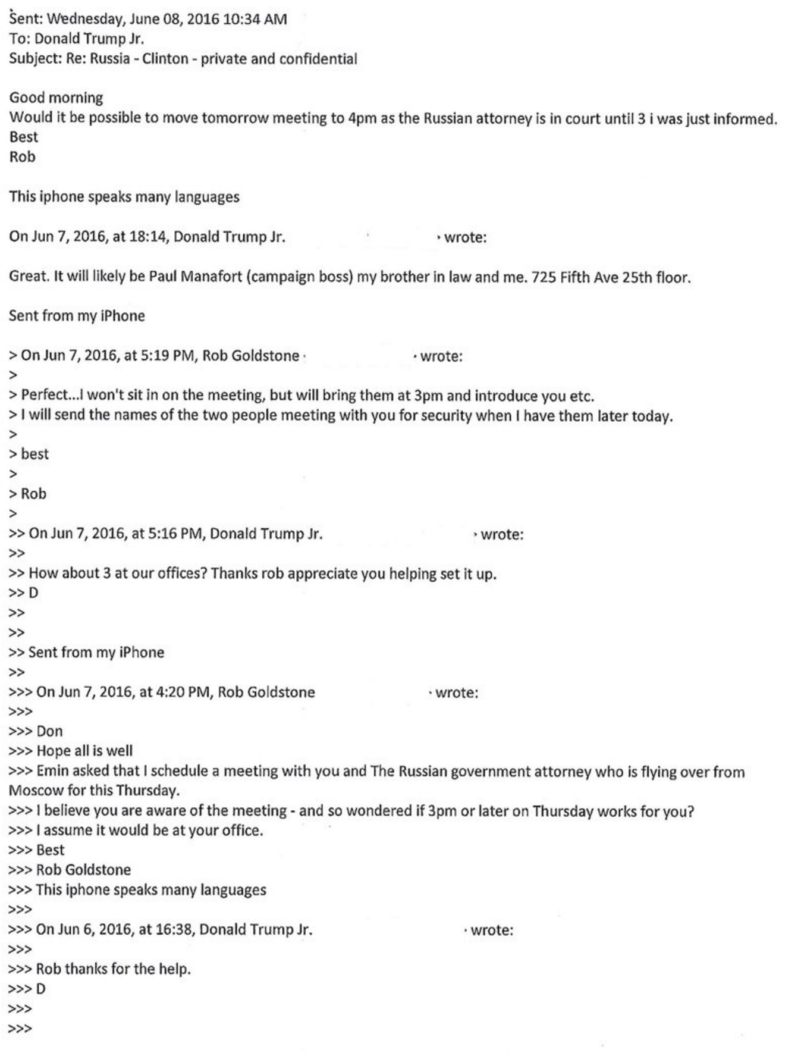 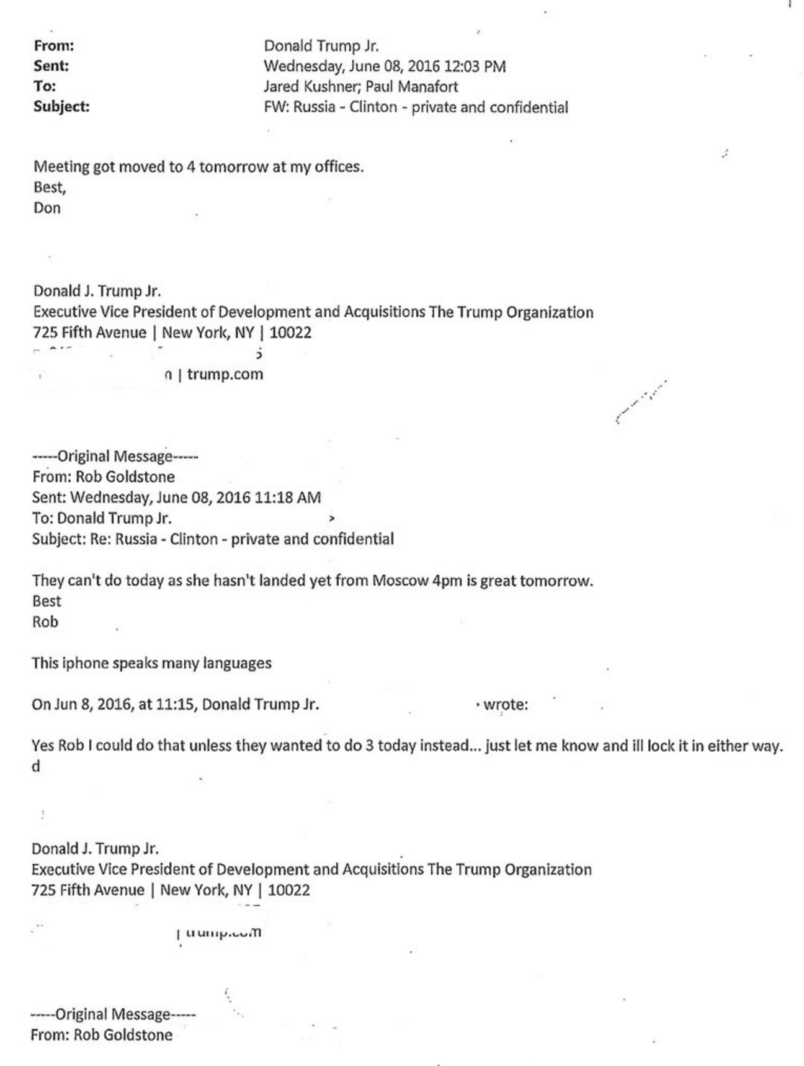 Matt Shuham (@mattshuham)  is a reporter in TPM’s New York office. Prior to joining TPM, he was associate editor of The National Memo and an editorial intern at Rolling Stone.
Allegra Kirkland (@allegrakirkland)  Allegra Kirkland is a New York-based reporter for Talking Points Memo. She previously worked on The Nation’s web team and as the associate managing editor for AlterNet. Follow her on Twitter @allegrakirkland.
Have a tip? Send it Here!
Dear Reader,