2 hours ago ago
Jan. 6 Panel Seeks Information From GOP Rep Who It Says Gave Tour Day Before Insurrection

5 hours ago ago
After Quitting, Election Official Has Grim Warning About A Future Of More Big Lies

With Kushner Revelations, The Worst Case Scenario Comes Into View

In the roiling controversies surrounding Jared Kushner and the broader Trump/Russia probe, yesterday’s article in the Times was the first to get at what is likely the underlying story.

Yet one current and one former American official with knowledge of the continuing congressional and F.B.I. investigations said they were examining whether the channel was meant to remain open, and if there were other items on the meeting’s agenda, including lifting sanctions that the Obama administration had imposed on Russia in response to Moscow’s annexation of Crimea and its aggression in Ukraine.

During the Trump administration’s first week, administration officials said they were considering an executive order to unilaterally lift the sanctions, which bar Americans from providing financing to and could limit borrowing from Mr. Gorkov’s bank, Vnesheconombank. Removing the sanctions would have greatly expanded the bank’s ability to do business in the United States.

In March, Mr. Gorkov said in a statement that his December meeting with Mr. Kushner was part of the bank’s strategy to discuss promising trends and sectors with influential financial institutions in Europe, Asia and the United States. That statement said he met with representatives of “business circles of the U.S., including with the head of Kushner Companies, Jared Kushner.” At the time, Mr. Kushner was still running the company, which is his family’s real estate business.

We’ve heard it claimed that this secret channel to Moscow Kushner and Flynn wanted to set up was to discuss the situation in Syria. That is simply not plausible. At least it couldn’t have been just about Syria as there are numerous legitimate ways to do that. If the conversations were about Syria and ISIS, which I find dubious, they must have included other topics which had to be hidden from the US government, the intelligence agencies and US military.

The most plausible ‘bad’ story behind the Trump/Russia mystery has always been some kind of financial preferment to members of the Trump family in exchange for lifting the sanctions put in place after the Russian annexation of Crimea and subsequent low-intensity incursions into eastern Ukraine. This wouldn’t come out of the blue. It would probably come in the context of some ‘deal’ over Syria or Ukraine or perhaps some agreement about global counter-terrorism cooperation. As I’ve written, there is a more ‘innocent‘ explanation as well. It may not be any quid pro quo. It could simply be years of doing business with Russians and people from other parts of the former Soviet Union which has made Trump inclined to see their needs in a sympathetic light. His hostility toward the sanctions regime could also be driven by the fact that, with his dependence on Russian and FSU investments and purchases, they likely hurt him directly.

This chart, let me be clear, is not a statement of fact. It is an effort to illustrate a series of patterns which are the subject, the subtext, of many of the reports about the Trump/Russia story and indeed the investigation. It looks at what each side wants, what each side seems to be getting. President Trump’s efforts to destabilize NATO and the EU are the most clear. These things are happening. The election hacking and subversion did happen. We know the Trump Organization has taken vast sums of money from Russia and other parts of the former Soviet Union over the last twenty years. Whether there’s any explicit quid quo pro today is what we don’t know. When people talk about collusion, this is the pattern of actions they’re looking at and trying to confirm. 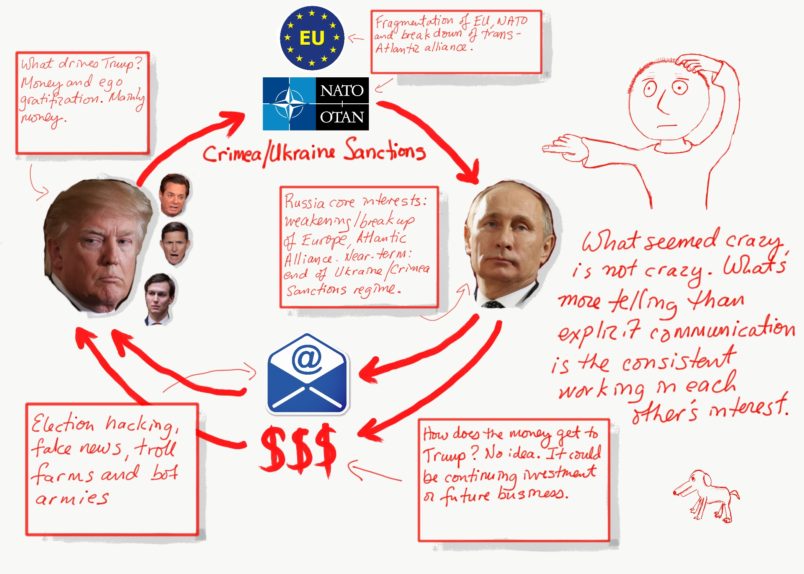 I would argue that an explicit quid pro quo or specific acts of collusion are almost beside the point. Trump is pushing a policy which is inimical to American interests (in my view and I think the view of many others) and aligns entirely with Russia’s key strategic goals. Precisely why this is happening strikes me as a second order concern.

But these new reports about Kushner, trying to set up a confidential line of communication hidden from the US government, meeting with a Russian banker whose role has focused on business ventures taken at the behest of the Russian government to pursue state interests starts to look a lot like the worst case scenario.