So here we are at 100 Days, an arbitrary but nevertheless significant milestone in a presidency. I wanted to step back and size up its meaning, both to give ourselves some perspective but also for those from other countries who are less familiar with the US federal system.

From a distance, it looks like the US federal system can up and pass laws pretty much whenever. In practice, particularly when it comes to laws tied to spending and taxation, there is an overlapping series of frameworks, scheduled vacations and legislative calendars, fixed election dates and more that constrain action to a great degree. The schedule of actions tied to writing federal budgets is a big one – though the deadlines have been missed with greater and greater frequency in recent years. Then there’s the matter of fixed election dates. In the US we tend to take this for granted. But it’s not the norm in major constitutional democracies. The fixed schedule matters a lot.

Mix in the American system’s separation of executive and legislative powers and it’s fairly complicated and time-consuming to get things done. So while the 100 Day metric is arbitrary (a concept that dates back to FDR), the first months of a presidency provide a window of opportunity in which a President has a relative free hand. The budget schedule is relatively far off in the distance. Elections are as far away as they can be in the US system. Scheduled vacations are in the distance.

Perhaps most importantly the President has an amorphous but real legitimacy to act. He was elected. He should get to put his program in effect. This is obviously a very fuzzy notion. Nothing mandates that it be the case. But in historical terms it demonstrably is the case.

You can dig into the formal and informal rules of American governance. But the upshot is that in the first months of a presidency the stars are aligned to get things done. A complex and perhaps sclerotic mix of governmental gears and pulleys are in a brief phase of alignment. If you look historically at the last forty years, the first months in office (whether or not precisely in the first 100 days) are when presidents got their big legislation passed.

An interesting example and counter-example is the passage of the Affordable Care Act in March 2010, a bit over a year into President Obama’s presidency. This was, as we can see, going on a year and a hundred days and it is certainly Obama’s most important and (seemingly) enduring legislative accomplishment. One might argue that the flurry of legislation and activity tied to the economic crisis was more important. But they were mainly one-time crisis measures rather than permanent reforms. In any case, the key to remember with Obamacare is that while it wasn’t finally passed until the Spring of 2010 the legislative process was well underway by the late Spring of 2009 and bills were coming out of committees in the House by the Summer. 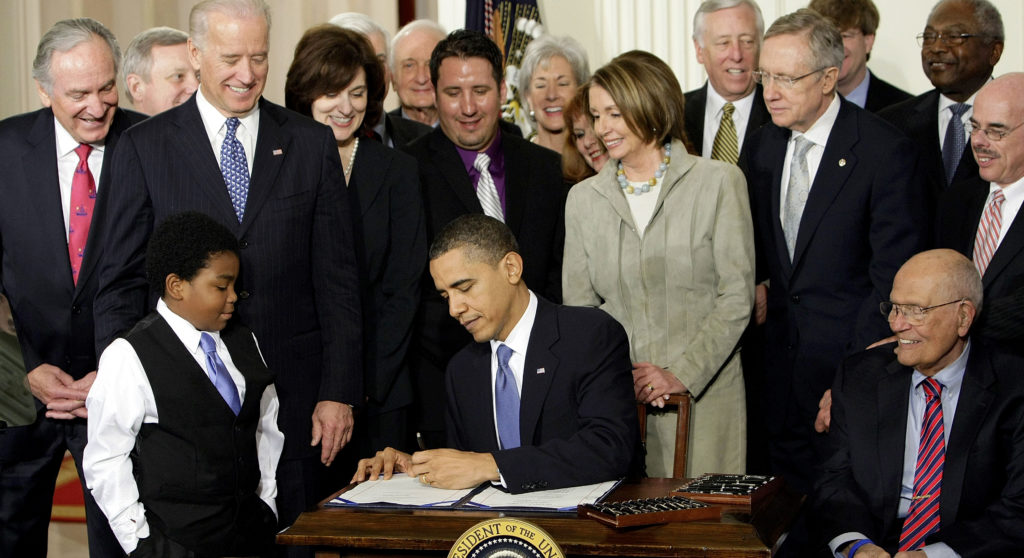 Despite the right-wing mythology that has grown up since, claiming that President Obama pushed legislation through on party line votes and didn’t reach out to Republicans to craft bipartisan legislation, really quite the opposite was the case. Indeed, one of the best critiques of the ACA legislative process is that Obama and the Democrats spent much of 2009 waiting on working groups (“gangs”) of Senate Republicans and Democrats trying to find some point of bipartisan compromise. The final bill was watered down significantly in that process. None of the Republicans voted for the bill anyway.

There’s an interesting debate to be had over whether the Republicans were operating in bad faith all along or whether right-wing opposition simply hardened over the course of the discussions. The real point is that big legislation is hard in the American system. The health care legislative process was slightly delayed by emergency economic crisis legislation in early 2009. But it got started early, took a long time and – this is the critical part – only barely ended up getting passed.

That last part is key. The law only barely got passed because the President and the Democrats were running up against all the constraints that make it important to get laws passed early. Partisan opposition was hardening. The President’s early-term popularity was slackening. Elections were on the horizon.

A central challenge for President Trump was always that he started his presidency distinctly unpopular. He was a minority rather than a plurality, let alone a majority, President. And he began his presidency with deep and entrenched opposition. On the other hand, he had congressional majorities which should have given him or at least his party a relatively free hand. That didn’t happen. A big problem was that Trump didn’t have any legislation or even a plan of governance ready. He barely even had a government at all in the sense that most key jobs were left (and remain) unfilled. He proceeded to fritter away his first months in office with a mix of scandal, disorganization and legislative ineptitude.

On Monday, President Trump’s 102 day in office, he will begin from more or less a cold start, as though the first three months hadn’t happened. The difference is that he’ll face a calendar that is far less friendly to legislation and he’ll have squandered whatever degree of good will, momentum or confidence he had from congressional Republicans in his ability to be an effective President.