19 hours ago ago
Cheney Underscores ‘Threat’ Of Trump As Jan. 6 Panel Gears Up For Public Hearings

The Trump Tax Return/Russia Letter Is Full of Holes

President Trump’s personal tax lawyers have now provided a letter, released by the White House today, which in essence says President Trump has no financial ties with Russia. There have been reports in recent days that the President’s tax lawyers were preparing such a letter, in part for Sen. Lindsey Graham. The letter is dated March 8, more than two months ago. How that comports with its release today and what we’d been led to believe about its recent preparation, I have no idea. But I wanted to share a few thoughts on what the letter does or doesn’t mean.

First, for the sake of discussion, I am going to assume that the facts asserted in the letter by Sheri A. Dillon and William F. Nelson are at least narrowly accurate. These are the same lawyers that put together the President’s ethics plan and withdrawal from active management of his businesses. So I’m not sure they have a huge amount of credibility. But if we just assume they’re lying, there’s no point in reading the fine print. Also, I am not a lawyer. So I’ll wait for lawyers and particularly tax lawyers to offer their analysis of the fine print. But there is some factual information I think I can offer based on my own reporting – and a careful review of the reporting of other journalists – about this letter and whether it really covers all the bases we’d like to see covered.

In short, I’d say not close. Here’s the text of the letter. After the letter, I look at where the holes are. 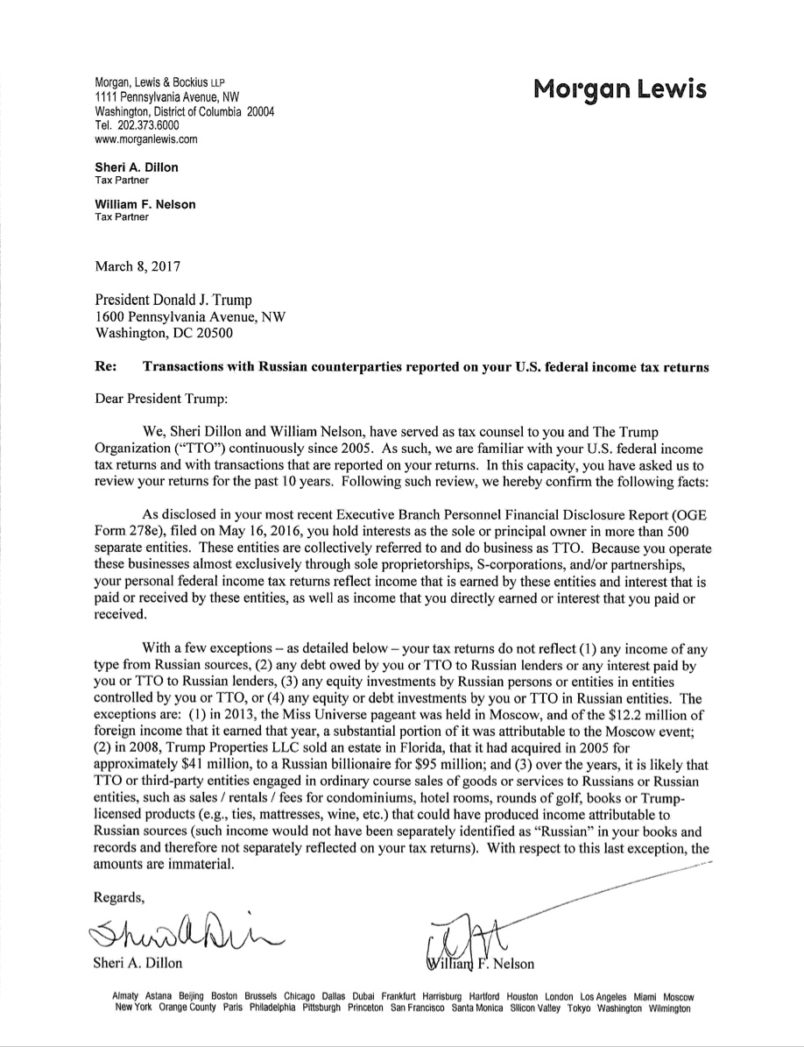 1: The upshot of the second paragraph is that since Trump runs all his operations as a private company, with the various entities working as pass-throughs, his personal taxes serve as an effective proxy for what his businesses are doing. That isn’t quite as tight as they’re suggesting.

2: The lawyers say they’re basing their analysis on the last 10 years of income taxes. That should cover a lot of ground. But why just 10 years? That leaves quite a number of years unaccounted for.

3: Here’s one point that is unclear to me. The text of the letter appears to assert these facts on the basis of Trump’s tax returns alone. The third paragraph reads “With few exceptions – as detailed below – your tax returns do not reflect …” and then lists three categories of financial dealings which are not shown. But lots of information of this sort would never appear in a tax return. Indeed, Trump and his surrogates have frequently made the same point. Seeing the tax returns wouldn’t even settle a lot of these questions. If I’m reading the letter correctly, the lawyers may know of information that is not reflected in Trump’s personal tax returns for the last decade and simply not mention those facts. Again, the letter specifically says “your tax returns do not reflect” not “you do not have.” This is, needless to say, a massive loophole in the assertions in the letter.

4: Why just Russia? Many of the questions people are looking at are tied to Kazakhstan, Ukraine and other post-Soviet states. Not just Russia.

1: No one thinks Trump has big investments in Russia. The issue is big Russian investments in him or loans to him. On this it’s exclusion #3 in the letter which is key. That states “any equity investments by Russian persons or entities in entities controlled by you or TTO [the Trump Organization] …” I’ve highlighted the word ‘controlled’ because that seems key. All the instances that I know of where Russian or former Soviet Union investment played a big role weren’t actually Trump companies. Indeed, most of Trump’s major building projects in the last two decades actually weren’t owned or funded by Trump. In many or most cases he wasn’t even a significant investor. In most of these cases, there’s a group of investors. Trump gets a significant upside of the project without the need to invest a significant amount of capital or risk losing it. And finally, and significantly, there’s a deal for the Trump Organization to manage the property. This isn’t some notional scenario I’ve contrived to evade the parameters of the exclusion. It’s actually Trump’s primary business model going back two decades. Licensing his name to major projects, contracting for on-going management of the facility and risking very little exposure or venturing much capital. I think it’s fair to say that most of the projects that people are most interested in wouldn’t be counted under this standard. Whatever the percentage of equity ownership, Trump quite clearly did not “control” these entities in most or perhaps even all cases.

2: A major source of suspected money to the Trump organization comes from wealthy people or oligarchs from post-Soviet successor states. This is beyond suspicion. This is actually fairly well documented. The question is just the scale of these in-flows and how directed they may be. As I read item #3 in the “exceptions” section of paragraph #3 apartment or condominium unit sales would be included in “it is likely that TTO or third-party entities engaged in ordinary course sales of goods or services to Russians or Russian entities, such as sales / rentals / fees for condominiums, hotel rooms, rounds of golf, books or Trump-licensed products (e.g., ties, mattresses, win, etc.” This kind of broad exclusion makes sense if some Russian guy bought a Trump tie. It makes a lot less sense if it applies to sales of apartments, which I think it does. Notably, this paragraph concludes by saying the amounts involved are “immaterial.” That’s not “de minimis” as in too little matter. That means it just doesn’t matter. It’s just the lawyers’ conclusion. It says nothing about the scale of the money involved.

3: Finally, we know that Trump makes aggressive use of shell companies. We know that the Russian and Russian organized crime figures Trump is associated with do, too. (To be clear, shell companies are pervasively used for innocent and not-innocent purposes.) What’s not at all clear in this letter is whether the lawyers made any effort to look beyond what must be numerous shell companies involved here. If they made no effort to look behind the shells, the conclusions are nearly meaningless. And there’s nothing clear in the letter that suggests they did.

Again, I’m no lawyer. But I know a bit about Trump’s history of business with Russians and I can read language closely. On this basis, the letter seems to leave quite a lot of room for most or all of the ‘Russia connections’ that people talk about, even if every word is narrowly accurate.