We thought all hell was breaking loose yesterday. We were wrong. That’s happening today. The idea that a sitting President is threatening to sue a former top staffer over an NDA and (putative) defamation is so comically ridiculous as to defy rationality and mark a new summit of nonsense even in the nonsense pile of the Trump presidency. Taking the matter on the merits, it is hard to imagine the number of first amendment-based fences Trump and his lawyer (the same lawyer who Hulk Hogan and Peter Thiel used to destroy Gawker. Really.) have to jump to sustain this. In any case, close to a certainty, there will be no lawsuit.

Meanwhile, Matt Drudge is shooting off a series of tweets that appear to be either a prediction or a suggestion or perhaps even a report that the owners of Breitbart News will fire Steve Bannon. On this a minor digression … Since Breitbart the website has become a strange amalgam of right-wing chop shop with a Stalinist sensibility purveying fake news with an antic edge, there’s been a backdrop of criticism on the right that the Bannon-era Breitbart represents a betrayal of the late Andrew Breitbart who died in 2012.

Since Drudge eventually erases all his tweets, let me memorialize them here. 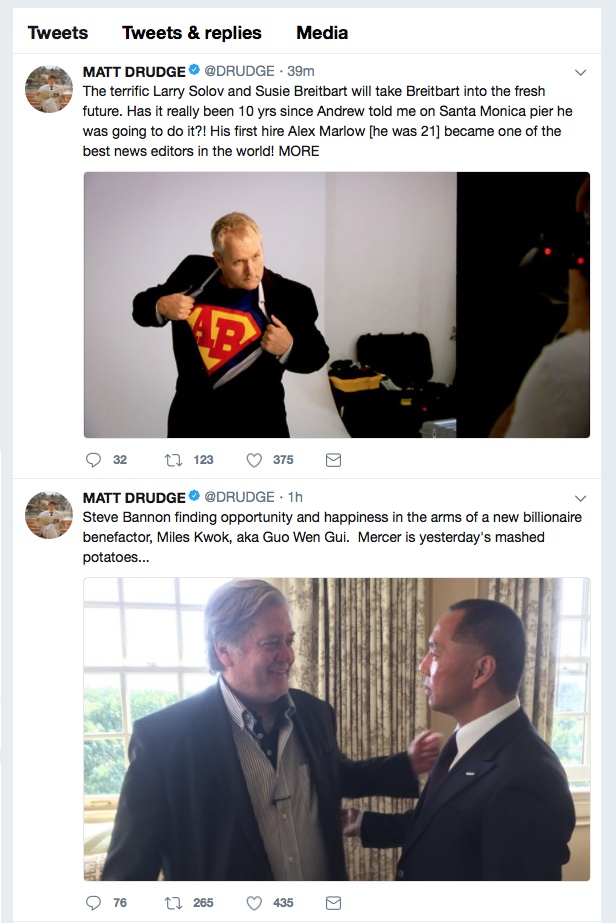 Let me share a few thoughts about this. Breitbart had at least elements of publishing genius. He was a critical player in the growth of three media properties that have had a defining force for good or ill in the last twenty years: The Drudge Report, Huffington Post (yes, true, though you may not have known) and his own eponymous media brand. He was also fascinating as a person. I did not know him well at all. But I did have a number of encounters with him and a few exchanges by phone and email. He had an immense charisma. He was also completely nuts. It was no act. The idea that Breitbart himself would be ashamed or shocked about what “Breitbart” has become is quite simply nonsense. Breitbart’s media legacy is a profound one, for good or ill. But it is and was always one of nutball conspiracy theories, instrumentalist propaganda over anything one could reasonably see as journalism (and consciously so) and in the final analysis right-wing grievance journalism. Fundamentally, rightist grievance politics and rightist grievance journalism. Bannon carried on Breitbart’s legacy in every way.

One of the many oddities and comedies of this moment is that Michael Wolff is anything but a reliable narrator of the Trumpian moment. A year ago he was effusively and conspicuously praising himself as a practitioner of sycophancy-based access journalism, the only journo who would or could cover Trump on the merits rather than be swept up with the preening opposition and grandiose efforts to destroy the real estate hawker turned politician. Now this. It makes perfect sense. Never trust an ingratiating reporter. But to keep ourselves on our own toes, again, I don’t think we should see him as an entirely reliable narrator of the story. The key points though, the quotes? They probably bear out. In any case, according to Mike Allen at Axios, Wolff has tapes. I’m sure he does.

Through all this, remember a simple point: on the big question of actions between Russia and the Trump campaign, they are certainly guilty as charged. As I explained yesterday, how far it went, how high it goes, whether Trump himself crossed a line that can be proven, all of those questions are yet to be determined. But fundamentally, Trump and his associates have grave misdeeds to cover up. All the chaos of the last 48 hours is merely a continuation of that. The idea that a sitting President can seek to silence critics and silence dissent using the civil courts is as monstrous as it is comical and is entirely in keeping with the practice of broken democracies that slip into autocracy. (And yes, even though it’s Steve Bannon, it’s still dissent.) But it’s chaos and impulse and incompetence at the core.

Have you ever seen a coiled hose that suddenly has hugely pressurized water run through it? We all have. It swings and jerks violently this way and that. It gets everyone wet. There’s violence and chaos but no real plan. It’s reflex. That’s our President. But it’s not water. It’s fire. This instinctive, peristaltic kind of chaotic action is the way to understand him. Not any theory. That’s what’s happening today and will continue for every day of his Presidency, albeit with lulls of lethargy and torpor here and there.

He is likely the most reviled and mocked man in the entire world today. He is also the most powerful, because of the unique attributes and powers of the American presidency. He’s tossing around nuclear threats with another man on the other side of the globe who has power similarly because he was born into it. Another legacy kid with nuclear weapons. The whole situation is comical, mind-boggling and deeply dangerous.