30 mins ago
McConnell Breaks With Trump On Masks, Says There’s ‘No Stigma’ To Wearing Them

Alexander Malkevich runs an outfit called USA Really, a kind of Russia Today/RT on steroids, basically a Russian-financed news operation the aim of which is to portray the USA as in a state of tumult and chaos. Admittedly this is probably an easier case to make than it might have been in the past. Needless to say, Malkevich, a Russian national is an epic Trump. Here’s how McClatchy described it in June …

USA Really has all the markings of a Russian troll factory trying to undermine U.S. democracy, spinning conspiracy theories, aggregated news and opinions with an aim to show America in a state of near-chaos. Facebook and Twitter have shut down its accounts. When Malkevich’s website called for a rally June 14 to support President Donald Trump, it fizzled for lack of a correct city permit.

The content is a sort of agitated hybrid of Jill Stein, Tucker Carlson and Michael Tracey. One story I saw tonight was headlined “A USA Really correspondent went to Washington D.C. to take part in a meeting held by leading Republican political scientists to hear their opinion on the main features of this mid-terms campaign, and what has dramatically changed for the Party in the era of censorship and neo-liberal agenda.” 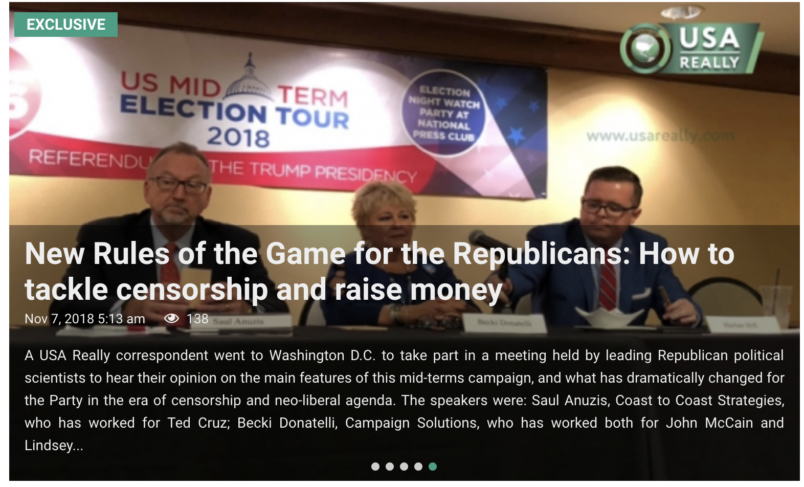 Various reports suggest that USA Really is financed by some mix of Putin-aligned oligarchs, possibly the same people who are behind the Internet Research Agency, the outfit that ran the 2016 troll and information operations targeting the US elections.

A short time ago the Russian news agency TASS filed a report suggesting that Malkevich was detained at Reagan National Airport by the FBI this weekend.

WASHINGTON, November 11. /TASS/. The Russian Embassy in the United States approached the US Department of State with a request regarding circumstances of an incident with detention of Russian journalist Alexander Malkevich in the Washington airport, the diplomatic mission tweeted on Sunday.

“In connection with mass media reports concerning detention of Russian journalist Alexander Malkevich by FBI officers in the Washington airport, an inquiry regarding the circumstances of the event was sent to the Department of State,” the Embassy says.

In connection with media reports concerning detention of Russian journalist Alexander Malkevich by @FBI officers in the Washington airport, an inquiry regarding the circumstances of the event was sent to the @StateDept pic.twitter.com/NSPjDM8WZO

Notwithstanding claims of “media reports”, the only sign of this I can find is this tweet and the TASS report above. They don’t seem to be ‘reacting’ to any reports because theirs is the first report. Even USA Really has no mention of it. Absent confirmation from a source which doesn’t emanate from the Russian state, I’m not sure we can be totally sure this even happened. But given the Butina arrest, it’s not surprising. And I’m not sure why they’d make something like this up.