At one point people 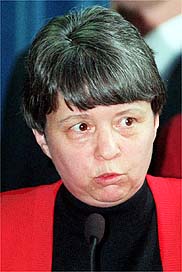 2001 investigating the unreviewable pardons of former President Clinton and the shenanigans of Senator Bob Torricelli (two cases over which she had at best uncertain jurisdiction) when her time might have been more profitably spent cracking down on Islamic terrorist cells in New York.

But it’s nice to know — even now — she still has time to work on the Torricelli case.

Certainly, everything looks different with post-9/11 hindsight. But it’s worth beginning to talk about what a profoundly injudicious prosecutor White is, and how poorly suited she is for her job.

But she’s a Clinton appointee, you say?

We’ll be saying more about this.