A new Gallup survey released Friday shows a marked uptick in the number of Americans without health insurance since the Trump administration took office—a reversal after years of decline and a historic record low under the Obama administration. 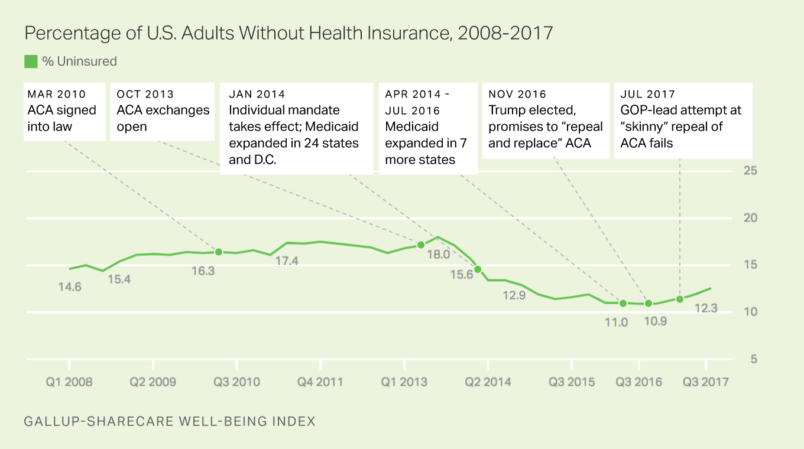 The survey, based on interviews with more than 45,000 people, found that every age group except Medicare-eligible Americans older than 65 saw an increase in the percentage of the uninsured.

“The growth has been concentrated mostly among middle-aged Americans, racial minorities and lower-income Americans,” Gallup reported.

The biggest drop has been on the individual market, the sector most impacted by the Trump administration’s actions: from cutting outreach and education funding to cutting off cost-sharing reduction payments to insurers to rejecting state waivers.

Gallup noted that if Congress and the President do not pass and implement a bill introduced this week to fund and stabilize those markets, the number of uninsured Americans will continue to increase.

New!
Start your day with TPM.
Sign up for the Morning Memo newsletter
Alice Ollstein (@AliceOllstein)  was a reporter at Talking Points Memo, covering national politics. She graduated from Oberlin College in 2010 and has been reporting in DC ever since, covering the Supreme Court, Congress and national elections for TV, radio, print, and online outlets. Her work has aired on Free Speech Radio News, All Things Considered, Channel News Asia, and Telesur, and her writing has been published by The Atlantic, La Opinión, and The Hill Rag. She was elected in 2016 as an at-large board member of the DC Chapter of the Society of Professional Journalists. Alice grew up in Santa Monica, California and began working for local newspapers in her early teens.
Have a tip? Send it Here!
includes:
Obamacare
Latest DC
Comments
Masthead Masthead
Founder & Editor-in-Chief:
Executive Editor:
Managing Editor:
Associate Editor:
Investigations Desk:
Reporters:
Editor at Large:
General Counsel:
Publisher:
Head of Product:
Director of Technology:
Associate Publisher:
Front End Developer:
Senior Designer: