3 hours ago
Judge Cannon Does Trump Another Solid

9 hours ago
Ginni Thomas Will Testify In Front Of Jan. 6 Panel This Week

Why This Is Obamacare’s Do-Or-Die Week

Since the day he was sworn into office, President Donald Trump and his administration have gone to significant lengths to weaken, undermine and attempt to repeal the Affordable Care Act. This week will demonstrate how effective their tactics have been.

For millions of people in the 39 states that depend on Healthcare.gov for open enrollment, the deadline to sign for health insurance for 2018 is Friday, Dec. 15.

Though the pace of signups when open enrollment began in November was surprisingly robust, with many more people signing up per day than in previous years under a supportive administration, the total number of enrollees is expected to fall far short of last year even in the best-case scenario. Already, according to an analysis by Avalere Health, the market is falling behind. 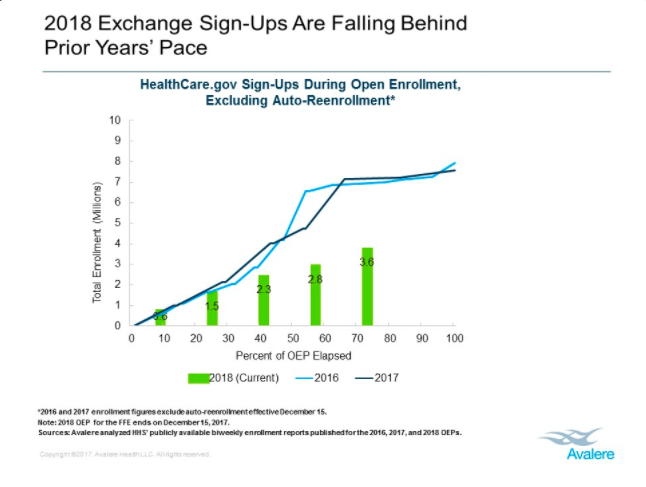 In an already weakened individual market, a dip in enrollment could drive up prices in 2019 and fuel the Trump administration’s narrative that Obamacare is “imploding” and must be repealed.

Here are the factors that will determine whether the ACA lives to fight another day:

It’s human nature to procrastinate, and every year that Obamacare has been the law of the land there has been a spike in enrollment as the deadline drew near.

“The big wild card is how big a surge there will be,” Levitt said.

One reason there could be an even larger surge than in previous years, he added, is the “widespread availability of cheaper plans for people who are uninsured”—an unexpected side-effect of Trump’s attempt to upend the individual market by cutting off subsidies to insurance companies earlier this year. The president’s constant disparagement of Obamacare could also backfire, and have the effect of reminding people that the law exists and is under attack, and spurring higher enrollment.

But the surge could very well be weak, as the new, earlier deadline and the lack of government advertising take their toll. President Trump cut 90 percent of the open enrollment outreach budget and more than half of the funding for in-person enrollment assistance, and severed enrollments partnerships with hundreds of community groups and corporations. The top brass at the Department of Health and Human Services, who in past years hit the road and lit up social media to encourage enrollment, this year have barely acknowledged open enrollment—tweeting more times about how to cook Thanksgiving dinner than about the enrollment deadline.

“We’ll only see a massive wave of enrollment if people actually know that December 15 is the deadline,” Levitt stressed. “With a massive decline in outreach and near silence from senior administration officials, it’s not at all clear we’re going to see a wave.”

Advocacy groups are attempting to fill this void. Lori Lodes, the former director of the Office of Communications for the Centers for Medicare and Medicaid Services (CMS), is one of several Obama administration alumni working this year from the outside to promote enrollment.

“Our big goal is to make sure that people know December 15 is the final deadline, and making sure the media is paying attention, especially local media,” said Lodes, whose group has been running digital ads urging young people to enroll in a health care plan. “It’s been really really tough because of everything that’s going on. But we need to create as much urgency as possible. The lack of government advertising is going to have such an impact in this final week, because we know from past years that young and healthy people have to be reminded again and again to take action.”

On Dec. 15, everyone who was enrolled in the individual market this year who failed to actively re-enroll for next year will automatically be re-enrolled in their current plan or, if it no longer exists, a plan the government deems “comparable.” Such a process swept up a few million people last year, and is expected to do the same this time around.

But in previous years, people who were auto-enrolled and found they did not like their old plan or couldn’t handle the premium hike still had a few weeks to find a new plan. This year, thanks to Trump cutting the length of open enrollment in half, auto-enrollees will be locked into their plans whether they like them or not.

Adding to that confusion, millions of people across the country have received renewal notices that grossly over-estimate the premium hikes they will experience next year, and many may not know that they are eligible for a cheaper plan.

That’s why health care analysts like Charles Gaba are pleading with the public to actively log on and weigh their options rather than waiting for auto-renewal to sweep them up.

“This year in particular it’s really, really important because of the weird pricing,” he told TPM. “I strongly urge that everyone actively shop around.”

If they don’t, he warned, we may see a wave of people quitting the market when their first premiums come due.

“Are you going to have this massive drop off in January, a couple million people?” he wondered.

Despite Trump’s outreach cuts, many states that run their own exchanges have seen robust enrollment this year, and nine of those states plan to allow enrollment several weeks past the federal deadline.

Experts like Gaba say this should make up for some, but not all, of the expected enrollment shortfall caused by the Trump administration’s efforts to dismantle the law.

“My very rough assumption this year—and I’ve stressed that who the hell really knows what will happen—was that about 10 million people nationally will enroll: 7.5 million on the federal exchange and 2.5 million on the state exchanges,” he said. “The state exchanges look like they’re going to beat that. They’re already at 2.3 million, and that was several days ago. The real question, to me, is healthcare.gov. I think lot of unsubsidized enrollees are going to drop their coverage—maybe a couple million people.”

Nearly everyone predicts a shortfall in enrollment, but the ultimate size of that shortfall will have serious repercussions.

“It’s been a struggle from the start of the ACA to get enough healthy people to sign up to balance those with preexisting conditions who gained coverage for the first time when discrimination based on health was prohibited,” Levitt said. “So declining enrollment means a sicker risk pool and higher premiums in 2019, because the people who remain on the sidelines are likely to be healthier.”

But Levitt and others stressed that in the current environment, even a shortfall of one million fewer people than the total who enrolled last year would be a success.

“It’s remarkable that enrollment is going so strong given all the headwinds,” he said. “The ACA is struggling, but it’s certainly not dead. Millions of people signing up is a testament that it’s very much alive.”