Jared Kushner owned a stake in his brother’s Obamacare-dependent health insurance company when it hired lobbyists to fight repeal of the law shortly before he divested from it earlier this year.

Joshua Kushner’s heavy involvement in the company has been widely reported. But his older brother’s partial ownership, through a stake in Joshua’s technology investment firm Thrive Capital, has been little noticed.

Jared Kushner did not list his holdings in Oscar Health Insurance on his personal financial disclosure form because he was not required to do so, as he included Thrive. But that company’s ownership, through a company called Mulberry Health, Inc., was highlighted by the White House’s own attorneys as a reason he needed to divest in Thrive around the time President Trump was sworn into the White House.

“One major holding of multiple Thrive Capital funds is Oscar Health Insurance. Mr. Kushner’s continuing interest in Oscar could require his recusal from a variety of particular matters that will have a direct and predictable effect on the health insurance industry,” White House Deputy Counsel Stefan Passantino wrote to the Office of Government Ethics in a letter explaining what Kushner would sell to avoid potential conflicts of interest and why. That letter is dated Jan. 25, 2017, less than a week after Trump’s inauguration.

Passantino’s letter was posted on the OGE’s website among documents that it has released pursuant to Freedom of Information Act requests.

It’s unclear exactly how much money Jared Kushner, who is Trump’s son-in-law and one of his closest advisers, had tied up in Oscar Health. His personal financial disclosure doesn’t break out the individual investments held by Thrive Capital, which Kushner had between $6 million and $11 million tied up in.

But while that appears to be far from Kushner’s largest venture, he wasn’t just a minor investor in the company, which in early 2016 received a $2.7 billion valuation.

A 2013 report to the New York State’s Department of Financial Services on Oscar’s corporate organization stated that the Kushner brothers were “deemed the ultimate controlling persons in Oscar’s holding company system because they are the only members of Thrive Partners III GP, LLC, which is the general partner in Thrive Capital Partners III, L.P.” 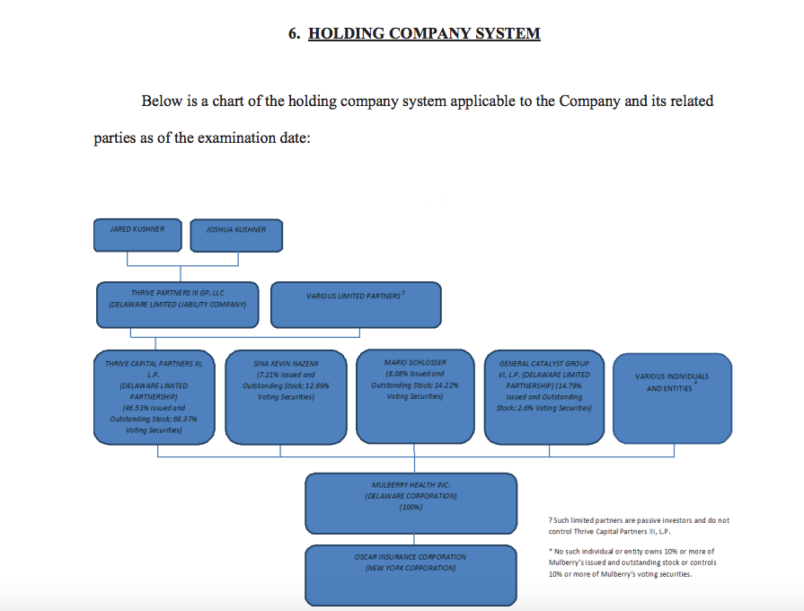 Three weeks before the White House wrote to the Office of Government Ethics outlining Kushner’s divestment plan, Oscar’s parent company hired lobbyists to prepare for the coming GOP efforts to repeal Obamacare. It is unclear if Jared Kushner had any involvement in the parent company’s hiring of the lobbyists during the Trump transition, though a White House source said that he had no involvement in Mulberry Health hiring lobbyists and no dealings with those lobbyists.

Oscar’s founders have been upfront about the importance of Obamacare to the company’s creation — and ongoing success.

“I don’t think we could do this without Obamacare,” Mario Schlosser, one of the company’s co-founders and one of Joshua Kushner’s college friends, told the Washington Post in 2013.

In the election’s wake, Schlosser and Kushner co-wrote a blog post on the company’s website in November 2016 arguing for the law’s importance and calling for it to be tweaked, not dismantled.

“While the ACA has significant flaws, we believe the majority of this pain [from rising insurance rates] is a result of the preexisting faults of our healthcare system,” the pair wrote, mentioning some of the law’s “serious shortcomings in design” but calling for relatively minor changes in the program rather than a dramatic overhaul.

Oscar’s parent company hired lobbyists to help make sure that vision was put to practice — three weeks before the White House officially announced Kushner’s plans to divest from the company. On Jan. 3, Mehlman Castagnetti Rosen & Thomas, Inc. filed a lobbying disclosure form announcing their hiring by Mulberry Health, Oscar’s parent company. As of March, Mulberry had paid the lobbying firm $60,000 for its work, according to lobbyist disclosure filings.

Calls and emails to Oscar Health Insurance, Thrive Capital Partners and Mehlman Castagnetti Rosen & Thomas were not returned. The White House declined to respond on the record for this story.

Jared Kushner seems to harbor similar views as his brother about Obamacare repeal. Sources confirm to TPM multiple outlets‘ reports that he was deeply skeptical of congressional Republicans’ push for Obamacare repeal from the start and called the push for the repeal a mistake — criticism that led Trump at one point to blow up at Jared Kushner and say he fully understood his position, according to Politico.

Jared Kushner’s involvement in the internal Obamacare debate included an early spring meeting he attended with House Speaker Paul Ryan (R-WI), Trump, senior White House officials and House members, and Zeke Emanuel, the Democratic architect of Obamacare who Kushner played a role in bringing in to discuss the law with his father-in-law. A source in the room told TPM that Jared Kushner was vocally critical of the House Republicans’ plan for replacing the law during the meeting.

Capitol Hill sources tell TPM that Jared Kushner wasn’t intimately involved in the congressional push to repeal Obamacare. Ryan has talked to him multiple times since the election but only once about health care, according to a source familiar with the conversations. Jared Kushner was skiing with his family in Aspen when the House had to cancel its first vote on the Obamacare repeal bill due to lack of support. Senate Republicans said they’d had little contact with him.

But he didn’t completely step away from the issue, according to sources. He was at the table during a White House meeting between Trump and top Congressional Republicans to discuss health care in early June, when Trump joked on-camera that his son-in-law had “become much more famous than me.”

Jared Kushner’s involvement on health care concerned some government ethics experts, who suggested it violated the spirit if not the letter of Trump’s own executive order barring people from working on issues “involving specific parties that is directly and substantially related” to former employers or former clients for two years. The OGE’s guidance on the matter says that broad topics like health care reform legislation don’t qualify because “it is not focused on the interests of specific persons, or a discrete and identifiable class of persons.” To further parse Trump’s order, Kushner may not fall under these circumstances since he was the owner and not an employee of the company.

“From a public interest perspective, the whole things reeks. From a black and white reading of the executive order it’s a little more gray. But it certainly goes against any claims to draining the swamp,” said Stephen Spaulding of the good government advocacy group Common Cause. “We shouldn’t be in a position where we have to be parsing the order, there should be a clear separation.”

While other insurers have scaled back on offerings on the individual health care exchange markets due to uncertainty around the law and Trump’s threats to stop making cost-sharing reduction payments to insurers, Oscar has actually increased its offerings this year.