This is the most surreal and dark story. An outfit called the Kentucky Center for Investigative Reporting earlier this week published an incredibly lengthy and detailed expose of a Kentucky state representative named Danny Ray Johnson. Last night, moments before I started writing this post on a train home from Washington, Johnson was found on a bridge with a self-inflicted gunshot wound to his head. This was a day after defiantly protesting his innocence and refusing to resign his office.

The central accusation in the KCIR story was that Johnson, 57, had molested a then-17 year old friend of his daughter toward the end of an alcohol fueled party. These parties, drenched in alcohol, with half-dressed young women in abundance were apparently regular fare at the Church of which Johnson was the founder and pastor. He called himself the Pope of the church. You’ve probably never heard of him. I had no recollection of him though he’d actually shown up in TPM’s pages last November, after winning his state legislative seat “despite a series of Facebook posts that depicted President Barack Obama and his wife as monkeys.”

Johnson’s now 21 year old victim – the full story makes it unimaginable there aren’t many more – called Johnson to account personally at the time in a series of Facebook private messages. She went to the police, who seem to have either botched or just buried the case.

Just before taking his own life this evening, Johnson wrote a rambling and palpably desperate Facebook post. 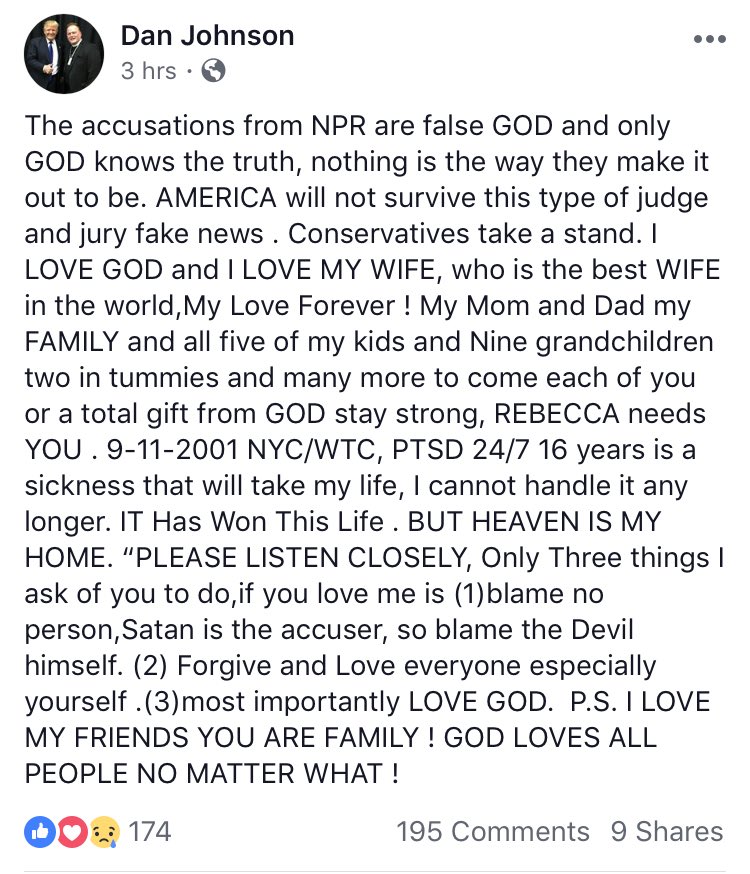 You’ll see here that Johnson referenced PTSD from events at the World Trade Center complex on 9/11. Yet, as the expose explains, it seems highly likely that Johnson wasn’t in New York on the day of the attacks at all. He had concocted a story about visiting the Trade Center on the day in question and being pulled into chaos of the day as an impromptu clergyman, ministering to the dead, setting up a makeshift morgue. There’s no evidence any of this ever happened. But Johnson was apparently such a canny fabricator and con-man that he’d managed to extract workers comp checks from New York State, apparently tied to his phantom 9/11 service.

Johnson claimed to have been a White House chaplain during the presidencies of George H. W. Bush, Bill Clinton and George W. Bush. He said he worked with the United Nations, and performed miracles, including healing a man of deafness. He claimed to have been present during the Rodney King riots in 1992, creating “safe zones” throughout the city of Los Angeles. He also insisted that he worked in Venezuela and Colombia and received a “doctorate of divinity” from Kingsway University and Theological Seminary in Des Moines, although a spokeswoman for the school says he worked there but never earned his degree.

Johnson was an avid Trump supporter, making headlines for preaching Trump at his church, the one in which he served as “Pope”. He was also it seems a repeat arsonist. The church was colocated with a “fellowship hall” called the “Pope’s House” appropriately or inappropriately enough, where there were ribald, Spring Break type parties every weekend.

Another clip from the KCIR report …

She also recalled sermons laced with racist and anti-Islam comments. And congregants smoked in church. “I didn’t want to be associated with that,” Stepp said.

Stepp grew troubled by another component of the church: the weekend parties at Pope’s House.

“The first night I went up there I was like, ‘Wow… never seen a church like this before,” Stepp said.

Law enforcement saw some of this, too. State and local Alcoholic Beverage Control officers cited Johnson and the church three times between 2008 and 2015 for unlicensed alcohol sales.

Clearly, Johnson was guilty at least of sexual assault. He was a habitual liar, a hypocrite on multiple fronts. Yet what struck me reading about his bizarre life was a certain American type, the con man. I don’t just mean the swindler, the character who tricks people out of their money, but the serial reinventer and fabululizer of himself.

Because it’s my own academic background I associate it with the first half of the 19th century. It’s not unique to that period or especially associated with it. There’s just a literature about the type based on that period. So that’s my association. Its part of a history of patent medicine sellers, religious enthusiasts who may at some level have believed their vocation but were also hucksters and thieves, often with multiple wives, pregnancies of abandoned underage girls. There’s a type from that period of American history in which the wave of population was rolling across what was then called the ‘Old West’, birthing countless towns that hadn’t existed only a few years before. Total reinvention was endlessly possible since none of these town had any history. You could be anything you wanted. There was no proof or disproof. No way to know.

I know the explosiveness of mentioning the President in the same breath as Johnson. Donald Trump would never end up like this. But there is a common thread of hucksterism, showmanship and deceit uniting the two and making them both jaggedly representative of our moment. Trump plays big. “Steal a little and they throw you in jail, Steal a lot and they make you king.” Trump’s scams, unchained appetites, swindles were national and now global. But he’s still the type. His bizarre genius is that his hidden stories aren’t even hidden. They’re there too. Right in front of you. It doesn’t matter.

Last year, in the year of the Trump wave, Johnson made his move from “Pope” to politician. This was likely his undoing, as it was the probable impetus for journalists to start picking apart his house of cards life, which seems likely to have collapsed under the most casual inspection. Their inspection was not casual but dogged and intense.