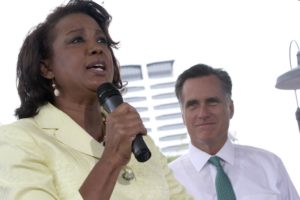 Can you say ‘cult of personality’?

Chris Suellentrop has a <$NoAd$>half bizarre/half chilling report from the campaign trail in Florida last night. It’s about what seems to be a new feature of the Bush rallies: the pledge of allegiance to President Bush.

“I want you to stand, raise your right hands,” and recite “the Bush Pledge,” said Florida state Sen. Ken Pruitt. The assembled mass of about 2,000 in this Treasure Coast town about an hour north of West Palm Beach dutifully rose, arms aloft, and repeated after Pruitt: “I care about freedom and liberty. I care about my family. I care about my country. Because I care, I promise to work hard to re-elect, re-elect George W. Bush as president of the United States.”

I know the Bush-Cheney campaign occasionally requires the people who attend its events to sign loyalty oaths, but this was the first time I have ever seen an audience actually stand and utter one. Maybe they’ve replaced the written oath with a verbal one.

I believe in one father, one son and one other son, who’s now governor of Florida, who will take over after this son retires from office in 2009.