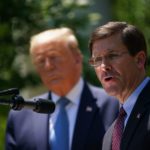 2 hours ago
What Happens When John Roberts Can’t Be The Swing Vote Who Moderates The Court?

Kudlow Walks Back Past Remarks After Trump’s Executive Orders: ‘I’m Not The Lawyer’

By Summer Concepcion
|
August 9, 2020 10:41 a.m.
EDITORS' NOTE: TPM is making our COVID-19 coverage free to all readers during this national health crisis. If you’d like to support TPM's reporters, editors and staff, the best way to do so is to become a member.

White House economic adviser Larry Kudlow on Sunday attempted to defend President Trump’s flurry of executive orders signed the day before, despite arguing recently that only Congress had the authority to address unemployment insurance benefits.

On Saturday afternoon, the President signed four executive orders on coronavirus relief Saturday, which included providing up to $400 in unemployment benefits, after Democrats and the White House failed to reach an agreement on a relief bill. However, Trump’s memorandum of unemployment insurance benefits asks states to cover 25% of the cost. Unemployment benefits previously ran at $600 a week.

When pressed by CNN’s Dana Bush on Sunday morning about his remark on Fox Business this week, arguing that the unemployment issue could only be fixed and extended by an act of Congress, Kudlow declined to say whether the President’s executive orders were legal and tried to walk back his previous remark.

“Well, I’m not the lawyer, and I probably spoke out of turn there because I worked all week with our counsel’s office and they proved to me that we could use the Stafford Emergency Act and that we could repurpose funds to do that,” Kudlow said. “So I probably shouldn’t have said that.”

Kudlow said that he initially thought that the White House could reach a deal with congressional Democrats, before arguing that the President was “right” to bypass Congress by issuing executive orders regarding how taxpayer dollars are spent.

“So the President decided to take action on his own. Of course, I think he was right to do so,” Kudlow said. “When the lawyers gave me a green light, then, sure, no problem.”

Kudlow then added that Trump has said that his administration will use every power the federal government has to help with coronavirus relief, before Bash pressed him again on whether the President overstepped his power.

Kudlow acknowledged that a debate will most likely ensue before reiterating that he’s “not the lawyer.”

“I can’t give you the final word, but (White House counsel) Pat Cipollone has gone through it with a fine-toothed comb,” Kudlow said. “And he believes we can do it and we are going to absolutely do it.”