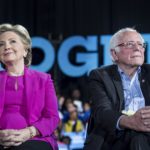 2 hours ago
The 2016 Election Refuses To Die

During his speech, Trump accused some Jewish American people of not being sufficiently loyal to Israel.

He also told the mostly Jewish audience that they wouldn’t vote for Sen. Elizabeth Warren (D-MA) for president because, according to him, they want to protect their money from her proposed wealth tax.

“You’re not going to vote for Pocahontas, I can tell you that much,” Trump said, using his racist nickname for the senator.

“Even if you don’t like me — and some of you don’t; some of you, I don’t like at all, actually — and you’re going to be my biggest supporters because you’ll be out of business in about 15 minutes,” he continued.

Trump made similar comments in August about Jewish people who don’t vote Republican.

“I think any Jewish people that vote for a Democrat, I think it shows either a total lack of knowledge or great disloyalty,” he said.

Watch Trump’s speech on Saturday below: