1 min ago
Report: Trump Blindsided RNC Planners With His Threat To Pull Convention From NC 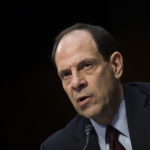 As the Ukrainian scandal unfurls, many players, both leading and supporting, have come to the attention of the House committees conducting the impeachment inquiry into President Trump.

This week saw the testimonies of three current or former administration officials, with still more to come. They helped paint a picture of President Trump’s unprecedented effort to lean on a foreign government to manufacture dirt on a political opponent.

Here’s a rundown of what we learned from statements and leaks out of this week’s depositions so far:

Hill testified Monday, making the most waves with her comments concerning former National Security Adviser John Bolton. Hill said that she attended a meeting on July 10 with Bolton and U.S. ambassador to the EU Gordon Sondland, during which Sondland made clear that he wanted the Ukrainians to investigate the Bidens.

Afterwards, Bolton told her to tell White House lawyers about the pressure campaign, adding that he didn’t want to be part of the “drug deal” Sondland and acting White House Chief of Staff Mick Mulvaney were cooking up.

In an earlier conversation, Bolton had told her that Giuliani is a human “hand grenade” who was going to “blow everybody up.”

Hill said that she personally confronted Sondland about why he was even involved in Ukainian affairs at all, at which he cited a directive from the President.

Before she went before the House committees, Hill rejected the White House’s claim that her testimony was impermissible due to executive privilege, asserting that much of what she had to discuss had already become public knowledge. Her lawyer also argued that such privilege dissipates in the face of government wrongdoing, a tune that may be picked up by other administration officials who want to testify.

Kent told House lawmakers Tuesday that when he spoke up about Giuliani’s meddling in Ukrainian affairs in the spring, Mulvaney told him to “lay low” and to focus on the non-Ukraine countries in his portfolio.

All Ukrainian matters, Kent testified, were to be left to the “three amigos” — Energy Secretary Rick Perry, U.S. Ambassador to the EU Gordon Sondland and special U.S. envoy to Ukraine Kurt Volker.

McKinley told House investigators Wednesday that he quit his post after 37 years of service because State Department brass refused to stand up for diplomats steamrolled in the impeachment inquiry.

He also expressed alarm at the heart of the inquiry itself, that Trump and cronies ran a pressure campaign to force a foreign government to harm a political rival.

McKinley said that the last straw for him was the ouster of U.S. ambassador to Ukraine Marie Yovanovitch. At the very least, McKinley wanted Pompeo to issue a statement of support for her after Giuliani successfully got her booted over her refusal to play along with the pressure campaign. Pompeo refused.

The split between McKinley and Pompeo was acrimonious, with the latter penning no statement of gratitude for his decades of service.

After pulling out of an earlier planned deposition, Sondland sat for his testimony on Thursday. According to his prepared remarks, he shifted blame to the President and Giuliani, bemoaning that he was forced to work with the President’s lawyer through unofficial channels, but agreeing to it to further U.S. goals in Ukraine. His participation in a text chain with Giuliani and other state officials will likely prove difficult to distance himself from, though, as it spells out his part in the scheme.

On Friday, Laura Cooper, a deputy assistant secretary of defense for Russia, Ukraine and Eurasia policy, is set to testify. Little is known yet about her role in the scandal.

To Come Next Week

Finally, looking ahead to next week, the committees are trying to schedule top U.S. diplomat in Ukraine Bill Taylor to give a deposition and have asked him to appear on Tuesday. It is not yet clear if he’ll comply, though his messages in the Sondland-Volker-Giuliani text exchanges marked him out as the most resistant to the pressure campaign, calling the leveraging of military aid “crazy.”