Democratic Leaders ‘Apologize’ To GOP Congressman If They Disrespected Him

The top four Senate Democrats jestingly apologized Thursday to Rep. Marlin Stutzman (R-IN) after the congressman said Republicans were not to be “disrespected” and must win something in return for keeping the government open.

“I want to apologize for anything I may have said that disrespected Marlin Stutzman,” Senate Majority Whip Dick Durbin (D-IL) told reporters at a leadership press availability.

Similar apologies were offered by Senate Majority Leader Harry Reid (D-NV), Sen. Chuck Schumer (D-NY) and Sen. Patty Murray (D-WA), who then called on Stutzman to stop disrespecting Americans harmed by the shutdown and agree to reopen the government.

Murray offered a “group hug” if it would help console the congressman.

The Democratic leaders brought a poster of Stutzman’s quote, as reported by the Washington Examiner. The GOP congressman walked it back on Thursday after it gained widespread attention. 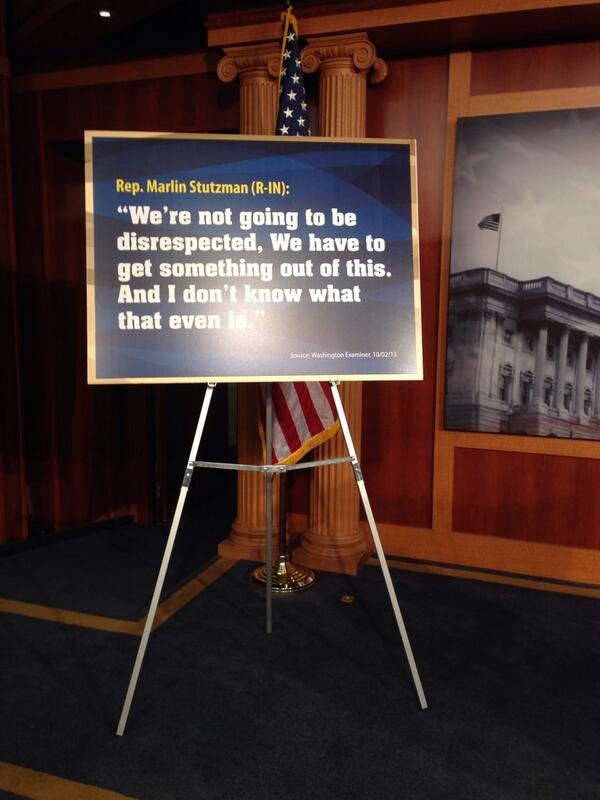 Newsletters
Your subscription could not be saved. Please try again.
Your subscription has been successful.
Sahil Kapur (@sahilkapur)  Sahil Kapur is TPM's senior congressional reporter and Supreme Court correspondent. His articles have been published in the Huffington Post, The Guardian and The New Republic. Email him at sahil@talkingpointsmemo.com and follow him on Twitter at @sahilkapur.
Have a tip? Send it Here!
Latest Livewire
Comments are now Members-Only