1 hour ago ago
DC Cop To Insurrectionist Assailant Who Later Called Himself ‘Stupid’: Yes, You’re Stupid 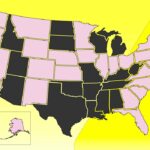 3 hours ago ago
If Roe Is Overturned, Abortion Will Be Near Instantly Illegal In A Third Of The States I don’t think it’s fair to say that the Democrats “drove themselves into a cul-de-sac” on the reconciliation bill because that assumes, or implies, that the Democrats had other options. It also makes the Democrats, writ large, responsible for the fact that two (!) of their Senators haven’t managed to learn the lessons of the last 30 years.

Perhaps it’s worth replaying the tape to see how we got here.

The reconciliation bill is obviously a ridiculous way to legislate. It would have been better for this to be half a dozen or a dozen separate pieces of legislation that go through regular order. That was not possible because of the filibuster, which at this point is being sustained by the intransigence of exactly two Democratic Senators. All of the others are, apparently, ready to eliminate the filibuster. This is shocking progress, and something I would not have bet would happen even 1 year ago.

So then we do the BIF and prepare to do the rest in the reconciliation bill, which was the only choice left with the filibuster. At the time, the linkage between these two bills was controversial only with Republicans; all the Democrats seemed to be on board with it, including the Manchin caucus. Then, after the BIF passes the Senate, the Manchin caucus starts maneuvering to break the linkage — to get their bill passed and scrap the rest of Biden’s agenda. What’s their problem with the reconciliation bill? Well, it’s hard to say, but it sure seems like the things the Manchin caucus dislikes in the bill are all the popular provisions. They also appear to think that the bill’s social welfare improvements are too generous so we should means-test them (i.e., make them incredibly complicated and totally useless to the middle class).

So the lessons that the Manchin caucus has failed to learn are as follows:

1. The filibuster is bad and forces the Senate to do things in a ridiculous, convoluted way. We should get rid of it. Then we could contemplate legislation like — Manchin’s voting rights bill!
2. Conservative Democrats shouldn’t screw over the rest of the party. It just makes everyone look bad.
3. Democrats should support popular legislation and avoid unpopular legislation.
4. Democrats should keep things simple, make benefits universal, and make the benefits kick in immediately rather than waiting multiple years for them to start up.
5. Democrats need to act when they can, because undisputed control of Congress and the White House is ephemeral.

All of the lessons above appear to have been learned by the 48 members of the Senate who aren’t in the Manchin caucus. All the dysfunction we’re being treated to now is due entirely to the 2 members who haven’t learned it. What exactly should the Democrats have done differently?

The reconciliation bill contains the Biden Administration’s agenda for getting climate change under control, and these parts of the bill appear to be a particular target for the Manchin caucus. I think that this represents an existential crisis for the Democrats. There are a lot of people who recognize that this is the most important part of Biden’s agenda, not just the top priority but the overriding priority. What that means to that set of voters is that if this set of policies can’t be enacted by Democrats, then not only does it not matter what else they do manage to pass, but that it doesn’t even matter if the party ever holds power again. I think that a lot of people in Washington recognize this, and that’s why they’re so reluctant to simply let the Manchin caucus get its way.