28 mins ago
Newest Acting State Department IG Out After Just Three Months, Deputy Will Take Over 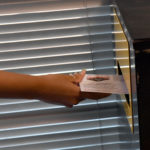 Here’s how the Family Research Council envisions things going if Don’t Ask, Don’t Tell is repealed: first, more straight soldiers, sailors, airmen and marines will be fellated in their sleep against their will. Then, commanders afraid of being labeled homophobes will refuse to do anything about it. Eventually, the straight service members will quit out of fear.

On a conference call with reporters today, FRC Senior Fellow for Policy Studies Peter Sprigg delivered the results of what he said was the first-ever study of “homosexual assault” in the military. Joined by several former military officers opposed to allowing gays and lesbians to serve openly in the armed forces, he warned Congress that the DADT repeal language currently under discussion with the agreement of the White House will turn the U.S. military into a terrifying free-rape zone where no heterosexual is safe.

“We are today releasing an analysis of publicly available documents which show that homosexuals in the military are three times more likely to commit sexual assaults than heterosexuals are relative to their numbers,” Sprigg said. “We believe this problem would only increase if the current law against homosexuality…were to be repealed.”Sprigg said his “analysis” was military documents tracking sexual assault cases. According to his figures, 8.2% of sexual assaults reported to military authorities in fiscal 2009 were homosexual in nature.

“Yet homosexual activists themselves have admitted that less than 3% of Americans — 2.8% of men and 1.4% of women — are homosexual or bi-sexual,” Sprigg explained.

“Taken together,” he continued, “these figures suggest that homosexuals in the military are about 3x as likely to commit sexual assaults as heterosexuals are.”

And the “most common type of homosexual assault” according to Sprigg? “one in which the offender fondles or performs oral sex on a sleeping victim,” he said.

The end result is obvious, according to the men on the call today: recruitment will be tougher and retaining straight servicemembers will be harder too.

On the call, I asked Sprigg to elaborate — was he really saying that non-consensual same-sex assaults would go unreported if Don’t Ask, Don’t Tell was repealed?

“In a number of these cases the victim was sleeping or intoxicated,” he replied. “Under those circumstances, their memory may be clouded and so the evidence may not be strong enough to stand up in a court-martial and actually prove guilt on a charge of forcible sodomy for example. Nevertheless, something inappropriate may have happened…and the victim will think twice about coming forth.”

Retired Col. Dick Black, who said he served in the Pentagon during the creation of DADT in 1993, said that essentially, allowing homosexuals to serve openly would create an environment where straight soldiers wouldn’t report attacks for fear of being told they “asked for it.”

“We faced this when we started tightening up on rape,” Black said. “Women were intimidated about coming forward — they’d be called sluts or you know they hung out in bars or whatever.”

When it comes to homosexual assaults, if the perpetrator is allowed to serve openly, it will be the straight men who find themselves facing embarrassing questions about what they were wearing the night they were attacked, Black said.

“I think we’re going to see the opposite direction when it comes to homosexual assaults,” he said. “You’ve got typically a one-on-one situation and there would be tremendous political pressure placed on the victims to remain silent. It will be very similar to the situation we had with women 50 years ago when they were reluctant to come forward and report rape because they would be mislabeled.”