9 hours ago
Bolton Told Barr He Was Worried Trump Was Doing Favors For Xi And Erdogan, Book Reportedly Says

15 hours ago
How Could GOP Senators Possibly Be ‘Blindsided’ Over Bolton Testimony?

Brookings: More Than 21M People Will Lose Coverage Under Graham-Cassidy

A new report from the Brookings Institute estimates that 21 million people will lose their health insurance by 2026 under Senate Republicans’ latest bill to repeal the Affordable Care Act. The report cautions that it’s a very conservative estimate that doesn’t take into account the bill’s per-capita Medicaid caps and the individual market turmoil the plan would likely create. The true number of uninsured people, the authors note, is likely much higher.

Because the Graham-Cassidy bill would repeal Obamacare’s individual and employer mandates, but retain the rule requiring insurers to cover everyone regardless of their health status, Brookings expects that only sick people who need insurance will purchase it, driving the price sky high for them and everyone else left in the shrinking risk pool. Those high prices will price many people out of the market entirely. 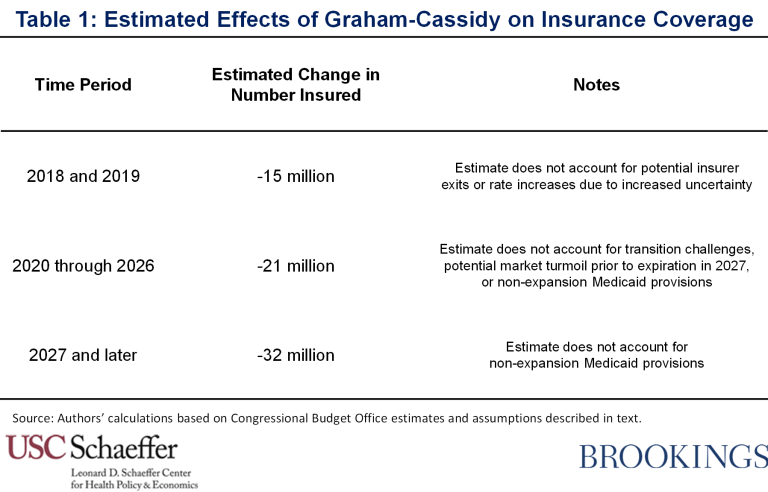 After 2020, the bill would also sharply cut back federal funding for states that expanded Medicaid, gutting some state budgets by tens of billions of dollars.

“Some states might elect to begin the process of winding down their Medicaid expansion prior to 2020, which could also add to coverage losses during this period,” the report noted.

Brookings also notes that there is nothing in the bill to prevent states from spending the federal block grants that used to be their Medicaid and ACA marketplace budgets for completely unrelated purposes, such as cutting taxes.

After 2026, the losses would become far more severe, with more than 30 million people losing insurance “because of the additional changes to the Medicaid program under this legislation.”

Alice Ollstein (@AliceOllstein)  Alice Ollstein is a reporter at Talking Points Memo, covering national politics. She graduated from Oberlin College in 2010 and has been reporting in DC ever since, covering the Supreme Court, Congress and national elections for TV, radio, print, and online outlets. Her work has aired on Free Speech Radio News, All Things Considered, Channel News Asia, and Telesur, and her writing has been published by The Atlantic, La Opinión, and The Hill Rag. She was elected in 2016 as an at-large board member of the DC Chapter of the Society of Professional Journalists. Alice grew up in Santa Monica, California and began working for local newspapers in her early teens.
Have a tip? Send it Here!
More In Dc
Comments
Masthead Masthead
Founder & Editor-in-Chief:
Executive Editor:
Managing Editor:
Senior Editor:
Special Projects Editor:
Investigations Desk:
Reporter:
Senior Newswriter:
Newswriters:
Editor at Large:
General Manager & General Counsel:
Publisher:
Head of Product:
Director of Technology:
Publishing Associate:
Front-End Developer:
Senior Designer: