41 mins ago ago
Kinzinger Praises Cawthorn’s Defeat: This Is ‘Good For The Country’ 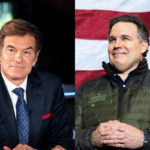 3 hours ago ago
For Pennsylvania Republicans, We Know One Thing: Kathy Barnette Will Not Be The Nominee

Two-Thirds Of Military Supreme Court Cases Are About Child Pornography

This fact shouldn’t disparage the largely upstanding population of military personnel. Rather, it highlights many important questions we haven’t answered about what is allowable behavior online–not only by individuals, but by law enforcement and the government.

We lack answers to questions about what to do about the sexualization of children and the dark markets that Internet has enabled; how our legal rights can and should be interpreted to properly address Internet behavior and what to criminalize; and in what ways military personnel ought to enjoy rights that mirror, or differ from, civilians.

Second, unlike civilians who must consider lawyer fees, there is no financial barrier to appeal for military members since they are represented by judge advocates. But most compellingly: there are many questions that are still unsettled by courts and legislators regarding what should be criminalized, and surrounding the search and seizure of computer or Internet material. This contributes strongly to the likelihood that there is grounds to bring appeal.

Unlike civilian child pornography law, military law does not require that the prosecution identify a real child victim. In the military, illegality of child pornography hinges on the good order and discipline of the military rather than victim-based harm, so there is no need to identify a victim before concluding that harm has occurred. This alternate conception provides an interesting foil to think about First Amendment concerns: in civilian law, the Supreme Court has held that to criminalize anything less than an image of a known child victim (whose identity can be verified), would not survive a balancing of the strong free speech interest.

Also, as the Supreme Court has upheld, military members enjoy less privacy and more overt government oversight than civilians. This isn’t surprising: in no other profession is it a crime if you talk back to your boss or to not show up for work. But it rings with new significance in an era when our lives are tied to Internet and wrapped up in data.
In one recent fact set of a USCAAF appeal, the military searched a wounded soldier’s effects before returning his laptop–a protocol to prevent embarrassing and/or classified material from propagating. The inspector discovered child pornography that formed the basis for a conviction (in fact, the soldier pled conditionally guilty after disputing the lawfulness of the search). The lower courts upheld the use of the evidence, but USCAAF determined that it was inadmissible. (United States v. Kelly, 72 M.J. 237, 2013). It confirms the tension between one’s sense of privacy in computers, and the exposed-ness required in some military protocol.

Meanwhile, child pornography also arises as a case because it hits moral triggers. It’s something that people turn each other in for, and military members are living in close quarters with others. Many fact sets involve roommates or spouses turning in a military member. For better or worse, the Internet has created dark corners for illegal marketplaces, the anonymity to conduct embarrassing or difficult transactions, and community normalization of illicit or bizarre interests. But anonymous and pseudonymous acts leave data trails and the online consumer is less anonymous than he might assume.
Child pornography is a unique, but representative, area of law and these cases are increasingly prevalent in civilian appeals as well. The fact that it is difficult to discern between lawful and unlawful searches of online material reflects broader confusion with Internet laws. Moreover, cybercrime like child pornography clamors for judges to be more conversant in technology. Many judges and legislators that did not grow up with Internet do not understand how the technology works or how users interact with it, nor do they understand the complex relationship of the Internet user to private companies that own the Internet’s architecture. Their lack of understanding undermines their ability to make the important judgment calls we need them to make.

In something as cutting edge and unwritten as Internet criminal law, intelligent policy decisions prompt old-fashioned questions. They are questions we have raised since the inception of America: How far should the Government be allowed to enter your living room in the name of security or morality-policing? What speech is not just unpopular but intolerable? How do we create a military that has the sovereignty and secrecy that national security demands, but takes account of human imperfections?

These are questions we have a vested interest in as Internet citizens. Internet is no longer the domain of the computer geek; we all bank online and talk to our mothers via email. It is a landscape we continually construct with our participation. This means that the significance of Internet violence doesn’t stop with its particular victim. Patterns of abuse affect us all. Repeated invasions redefine the lines of privacy expectations.

It’s important to articulate the values by which we want to live as Internet citizens, and child pornography appeals are an encapsulation of the questions we haven’t yet answered. Some are questions we haven’t even raised. But as the volume of cases standing before the court testify, those questions are increasingly staring us down.

Merritt Baer runs a cyber strategy consulting company, advising on cyber policy and working with young technology companies. She is a Fellow at the EastWest Institute and has conducted research with the Harvard’s Berkman Center for Internet and Society. After graduating from Harvard Law, she clerked for Chief Judge Baker of the US Court of Appeals for the Armed Forces.